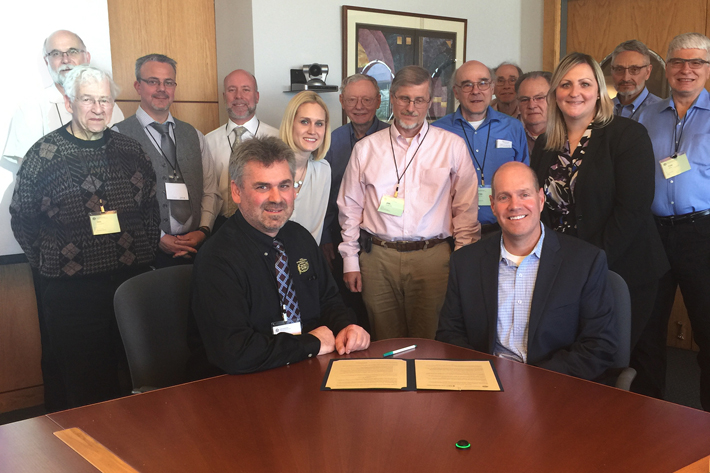 75 Years of Quality and Statistics

How an ASTM Committee Contributes to Quality Products and Services.
BY:
Neil Ullman

Caption: ASTM signed an MoU with NCSL International at a 2017 E11 meeting.

The committee on quality and statistics (E11) is celebrating its 75th anniversary in 2021. Created in 1946, E11 has worked to promote the appropriate use of the principles and methods of statistics and quality control in the development, application, and improvement of standards.

The roots of E11 are deep, going back to 1931. That year, Walter Shewhart, a member of the technical staff at Bell Laboratories, published a groundbreaking book called The Economic Control of Quality of Manufactured Product, which described how statistical practices could make major contributions to assuring quality products and services. The following year, Shewhart chaired a joint committee on the development of applications of statistics in engineering and manufacturing sponsored by ASTM and ASME (American Society of Mechanical Engineers). That group spurred the creation of the committee on methods of testing (E1) to establish a technical committee on interpretation and presentation of data.

By 1933, Harold Dodge, also from Bell Telephone, chaired a writing committee that prepared what today is known as Manual 7 (now in its ninth edition and titled, Presentation of Data and Control Chart Analysis). Initially, the manual described the presentation of data in an easy-to-understand way, but two important supplements were later added:

By 1940, the writing group recognized the distinction in roles between a manual and a consensus standard. The group’s first foray into writing standards was the practice for using significant digits in test data to determine conformance with specifications (E29). Within this standard was an important section on roundoff, defined as “the number of places to be retained in computation and presentation,” which evolved from the manual to be incorporated in the standard.

In December 1940, the U.S. Department of War requested that the American Standards Association (the forerunner of the American National Standards Institute) establish an emergency committee to prepare documents for applying statistical methods to the quality control of materials and manufactured products. Harold Dodge was invited to chair that group as well, and using the ASTM Manual on Presentation of Data, prepared three war standards. In 1941, Z1.1 and Z1.2, the guide for quality control and the control chart method of analyzing data, respectively, were published. Z1.3, control chart method of controlling quality during production, was approved in 1942.

After World War II ended, major changes began taking place in industry, leading to a reorganization of standards and related efforts. In 1946, two new groups were formally established. First, the committee on quality and statistics, originally called quality control of materials (the name has changed through the years), was approved with Harold Dodge as chair. The new committee consisted of approximately 25 self-appointed individuals, all with leading positions in quality or applied statistics in major industrial companies, government, or academia.

A new society was founded called the American Society for Quality Control (ASQC), consisting of many of the same individuals who were active on prior efforts. ASQC established a standards committee that took over the control charting standards, while E11 embarked on a range of new standards efforts, as well as maintaining the original Manual on Quality Control of Materials (which then became Special Technical Publication 15 , or STP 15), which was also endorsed by ASQC. The work has since been converted to Manual 7.

In the 1970s, the committee was focused on developing a single, society-wide standard on interlaboratory testing. At the same time, the International Organization for Standardization (ISO) committee on statistical methods was also organizing and proposing a parallel standard. In addition, many of the U.S. representatives were also key working members of the E11 committee. As the E11 task group was developing the practice for conducting an interlaboratory study to determine the precision of a test method (E691), many of the same individuals were working on the ISO version, ISO 5725.

Efforts also were underway to enhance the committee’s terminology during the 1970s. This resulted in the adoption of the practical terms “repeatability” and “reproducibility.”

E11’s important interlaboratory study practice (E691) was approved in 1979. At this time, the committee was working with ASTM’s Committee on Standards to incorporate section A21 into Form and Style for ASTM Standards (also known as the Blue Book). A21 requires that all ASTM test methods be part of ILS test programs and include information on precision and bias.

In order to educate committees on precision and bias, members of E11 began to provide formal training during ASTM officers’ conferences, beginning in 1981.

The committee adopted its current name after it merged with the short-lived committee on quality (E46) in 1988.

In recent years, E11 has continued to develop standards that reflect the needs of new and changing industries. The committee currently includes members from over two-thirds of other ASTM committees. It has helped to propose a new section A22 on measurement uncertainty for Form and Style for ASTM Standards. The committee has also been instrumental in the development of ASTM’s interlaboratory study department, which has facilitated many studies and continues to engage E11 members.

E11 has also played a major role in educating other ASTM members, as well as the larger international standards community, with the educational Data Points column that runs in Standardization News. Data Points, which breaks down many complicated issues related to statistics, is one of the most consistently popular features in the magazine. ■

Neil Ullman is a past chair of the committee on quality and statistics. He notes, “In 1976, I was fortunate to participate in a new ASTM effort called the Faculty Intern Program for faculty in technology programs, especially from community colleges. During the presentations about the many groups of committees, I managed to find the staff manager for E11. He was delighted at my interest, especially since they were being pushed to expand their membership. The committee had mainly been holding meetings at ASTM headquarters in Philadelphia, but they were going to hold the next meeting at the National Bureau of Standards (now the U.S. National Institute of Standards and Technology). I was invited to go to the meeting with him, which put a very positive spin on my attendance. As a result, I was happy to be welcomed into a group of leading applied statisticians that I mainly knew about but never had the opportunity to engage with. And because I was willing to participate in various writing efforts, I was able to become very active.”