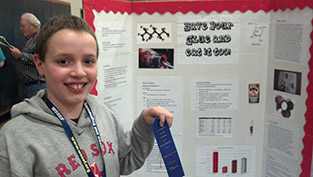 Have Your Glue and Eat It Too

Dylan with the first place ribbon he received at the state science fair.

Owens ran a materials engineering firm for 12 years and was familiar with ASTM. She initiated the research on ASTM's website that led to her conversations with Hugo, who provided Owens with ASTM standard D897, Test Method for Tensile Properties of Adhesive Bonds, as well as information on a scientific equipment retail outlet that features a page devoted to student projects on their website.

Owens notes that Dylan's interest in nature and science began with National Geographic videos he watched as a toddler. This love of nature led to the question that launched Dylan's project.

"My mom and I were talking about recycling cardboard and I asked the question, ‘Where does the glue go when cardboard is recycled?'," says Dylan. "I said we should probably be reusing or making biodegradable glue so it can be reused or go back to the earth. So I thought that natural adhesives would be a good way to solve that problem."

Dylan used the specifications in D897 to replicate a version of the testing apparatus described in the standard. He also read articles on adhesives, cohesives, carbohydrates, organic chemistry and tensile strength to help him understand his subject. Using popsicle sticks and C-clamps, Dylan was able to approximate the testing apparatus described in D897.

Dylan believes he was able to partially prove his hypothesis. His project, "Have Your Glue and Eat It Too," won the regional science fair in the fifth grade division and moved on to the state level science fair, which he also won.

Dylan says that he found that D897 was easy to use, once he learned the meaning of some of the "larger words" used in the standard. His research also led him to see how the standard was used in industry.

"It was cool to see how a company or lab was doing, on a larger scale, what I was doing on a small scale," says Dylan.

Dylan says he learned about tensile strength, the scientific method and the construction of molecules, among other subjects related to his project. When asked if he enjoyed using D897 to guide his work, Dylan emphatically replied, "Oh, yeah! It was really fun."

Owens noted that because Dylan worked so hard to develop his apparatus in accordance with D897, she appreciated speaking to Hugo in depth about how ASTM standards are developed.

"I had an inkling of the process but it was nice to talk to Joe to learn about the committee process," says Owens.

Dylan hopes to develop his ideas about adhesives further in future science fairs, exploring ways that biodegradable adhesives could be applied to real-world environmental issues on a global scale. Dylan will be entering middle school in September, and his courses will include accelerated math and science classes that will allow him to continue to pursue the ideas he's developed for broader and larger-scale science projects.

"I was happy to lead Dylan in the right direction to start his project," says Hugo, whose father coincidentally happens to have been a science teacher. Hugo also notes that Committee D14 members were thrilled when he reported, at the spring committee meeting, on the role that D897 played in Dylan's science fair success.