Revised standards for durable new materials could lead to bridges and infrastructure that last a century or more.
BY:
David Walsh

Following World War II, the economies of the developed world were ready to build.

In the United States, the post-war economic boom led to a massive expansion of the middle class, which in turn led to the golden era of the car and motoring for recreation. In response, President Dwight D. Eisenhower signed the U.S. Federal Aid Highway Act in 1956, authorizing the construction of 41,000 miles (66 000 km) of interstate highways and their attendant bridges and overpasses.

The post-war economies of Europe experienced a similar boom but with an increased urgency brought about by the devastation of their pre-war infrastructure. In short, Europe had to build in order to function again.

In both cases, the result was the modern system of highways and bridges that, with a few notable exceptions, the people of Europe and the United States still drive in 2020: a remarkable feat of engineering and determination that remains a marvel to this day.

However, if time and tide wait for no one, the forces of corrosion are even more impatient. Today, according to the Infrastructure Report Card, of the 600,000 bridges currently in use in the United States, approximately 240,000 are over 50 years old and nearing the end of their useful lifespans. According to the U.S. Federal Highway Administration, 47,000 bridges are currently classified as “structurally deficient,” which means, while not in imminent danger of collapse, they are in urgent need of repair.

READ MORE: Standards for the Roads You Drive

The state of European infrastructure is similarly dire. According to 2018 government studies cited by The Independent, 300 road bridges are at risk of failure in Italy, a third of the 12,000 road bridges in France require repair, and just 12.5% of road bridges in Germany are considered to be in good condition.

And sadly, as we have seen in several cases in recent years, a small number of bridges simply collapse, as in the case of the Ponte Morandi Bridge in Genoa, Italy. On Aug. 14, 2018, the collapse of this bridge took 43 lives. The bridge was built in 1968 and the cause of its collapse is still being determined, but The Independent and the television program NOVA have each cited corrosion as a factor.

But what if a bridge didn’t have to reach the end of its lifespan after 50 years? What if the materials used to construct it could last 75 or even 100 years? Gary Dallin, a member of ASTM International’s committees on steel, stainless steel, and related alloys (A01) and metallic-coated iron and steel products (A05) says those materials exist, and with the standards being developed by his committees, using them in current and future construction is becoming a widespread reality.

“After the Second World War, when it came to the bridges that had to be built to allow the highway system to be as extensive as it is, reinforced concrete was the material of choice,” says Dallin, director of the Galvinfo Center of the International Zinc Association. Reinforced concrete is the traditional building material used in bridges around the world and consists of steel rods — or rebar — encased in concrete. “But as concrete ages, a process called carbonization occurs, and carbon dioxide infuses into the concrete, and that makes the concrete more acidic. At a certain point, the corrosion of the rebar starts to accelerate.”

This process weakens the structure of bridge supports and decks, sometimes critically. And in areas of the world that experience snow and icing and combat this weather with road salt, the corrosion can be much worse than in dry areas, he says. “The chlorides are another accelerant, and they increase the rate of attack on the rebar.”

The result is the deterioration of bridge structures and shorter useful lifespans. Many solutions have been proposed over the years, but most have revolved around maintenance, says Dallin. 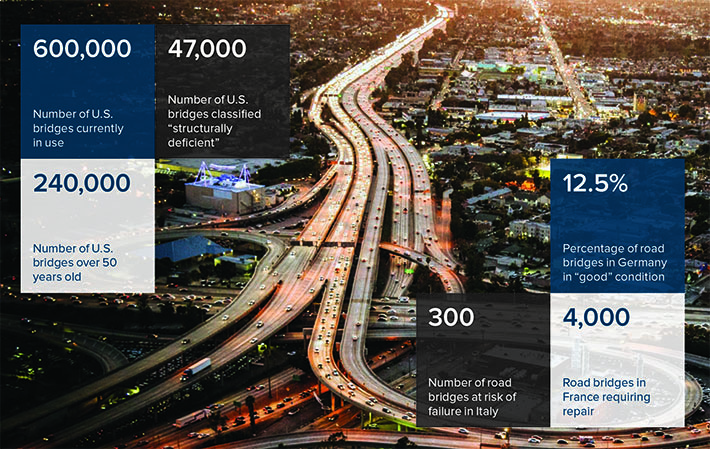 The world's infrastructure is aging and in need of repair.

“Over 40 years ago, epoxy coatings for rebar were developed to combat corrosion. They do delay the onset of corrosion and perform satisfactorily in nonaggressive environments,” he says. “In environments that use deicing chemicals, however, these products have been found to not perform as first expected.”

To many, this cycle of patching and repairing has become self-defeating as well as extremely expensive to state and local governments. Dallin says a better solution would be to invest in better building materials when constructing today’s bridges — materials that resist corrosion and last longer than a few decades — and save money in the long run. The use of galvanized, or zinc-coated, rebar is one of those materials, he says. “Zinc is a better material in concrete than iron and it resists corrosion.”

In fact, according to the International Zinc Association’s website, galvanized or zinc-coated rebar can potentially last longer than 100 years corrosion-free in certain environments.

There are more than 20 ASTM International standards covering galvanized rebar and sheet steel, but Dallin cites one in particular as being important to future infrastructure development. First published in 2015, the specification for continuous hot-dip galvanized steel bars for concrete reinforcement (A1094/A1094M) covers the relatively new process of continuously “hot dipping” — or galvanizing — steel bars for use in structures such as bridges. Traditional hot dipping is the process by which rebar is coated in zinc. However, the process has one key drawback.

“Hot dipping is a batch process  and involves putting a bundle of bars in zinc and letting it sit there and then bringing it up and letting the coating drain and solidify,” says Dallin. “But unless the specified coating is relatively thin, the zinc-iron alloy layers will crack when the bars are formed and the coating will flake off. If the product is used as-is without forming, it is very corrosion-resistant.”

The continuous hot dip process produces a zinc coating with a very thin zinc-iron alloy layer that is highly resistant to cracking and flaking, allowing builders to fabricate the rebar after it has been galvanized. This makes rebar galvanized with this process easier to work with and more likely to see widespread use in the future.

When rebar is continuously galvanized, the zinc coating is applied to the surface of a bar as it passes through molten zinc at speeds of up to 30 feet per minute. Currently, as many as nine bars side-by-side can be galvanized simultaneously on a coating line.

Dallin is currently leading the effort in A01 to revise the standard (WK68431). The revision will expand the types of steel bars that can be zinc-coated according to the standard, which will help these materials find greater acceptance and use. Specifically, the committee intends to add A1035 reinforcing bar to the existing standard, which currently uses a low-carbon, chromium-bearing steel. The type of steel the committee would like to add is considered to be corrosion resistant in itself. The application of a zinc coating to this type of metal would extend the steel’s life in concrete even further, delaying corrosion of the steel until the zinc has been consumed.

Dallin cites the standard specification for zinc and epoxy dual-coated steel reinforcing bars (A1055/A1055M) as a second standard that could contribute to the reality of a 100-year bridge. A1055 was last revised in 2016, when A1094 rebar was added to the standard as a substrate to be coated with epoxy. When that epoxy is eventually breached by moisture, the underlying zinc layer becomes the next line of defense protecting the steel underneath.

Margaret Farabaugh, technical services manager with Steel Dynamics and chair of A05, agrees with Dallin on the need to invest in more durable materials up front. Her company manufactures sheet steel, which is used in bridge decks and superstructures and can undergo the same zinc-coating process as rebar to limit corrosion. “I don’t think cost is something that should be a barrier to construction because you want something to last as long as it can. So I think putting a little extra cost in up front is probably worthwhile.”

As part of her work with A05, Farabaugh is leading the revision of the specification for steel sheet, zinc-5% aluminum alloy coated by the hot-dip process (A875/A875M). This standard covers a type of zinc-aluminum hybrid coating that she says can last up to twice as long as zinc coating alone. When passed, the revision (WK66908) will likewise further increase adoption of these corrosion-resistant materials and contribute to increasing the longevity of infrastructure in the long run.

“The revision will expand the standard to include different steel chemistries and grades, including high-strength, low-alloy steel, and some others that weren’t included in the original publication,” says Farabaugh.

Standards that allow for wider adoption of these materials by state transportation agencies and private contractors are a major step toward reaching the goal of a bridge that lasts for a century or more. The hope is that in the future, a country will never again face the prospect of having nearly a third of its existing bridges simultaneously reach the ends of
their lifespans. 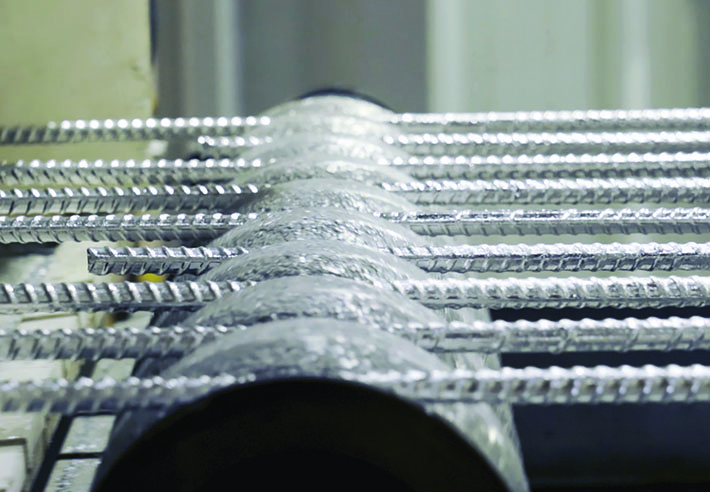 The continuous hot dip process (pictured) allows galvanized rebar to be formed without cracking the coating.

Farabaugh believes that inaction is not an option and that the issue of infrastructure needs to be addressed sooner than later.

“We are reaching a more critical level now. There was a lot of building done at a similar point many years ago, and these structures are reaching their end points — their maturity — all at the same time,” she says. “So it’s something that needs to be addressed.”

According to Dallin, the ASTM International standards being developed for the next generation of corrosion-resistant materials are the way to solve that infrastructure problem, both in the United States and globally.

“These standards and materials will provide a more corrosion-resistant product, at a moderate cost increase, that will be easier to install, and that will delay the need for any repairs off into the future,” Dallin says. “It will save money in the long term, both in materials and repair costs.”

In short, the work being done in ASTM’s committees will go a long way toward making the dream of the “100-year bridge” a reality.