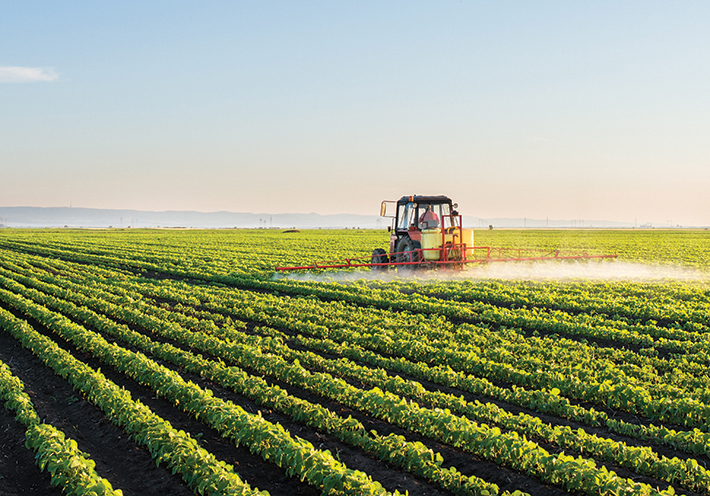 For as long as humankind has sown seeds and tended crops, it has battled against weeds. These pesky plants spring up in small plots and large fields, robbing seedlings of necessary sunlight, water, space, and nutrients such as phosphorus and potassium. They retard plant growth and increase their susceptibility to disease, fungus, and insect damage. In some instances, they are allelopathic, releasing toxic chemicals that injure or destroy crops. According to a 2020 report from the Centre for Crop Science at the University of Queensland, Australia, weeds are the most important biotic restraint to agricultural production. If left unchecked, they can devastate entire harvests, and can even result in a 100% yield loss.

To combat weeds, growers often turn to herbicides. Developed for agricultural use in the 1940s, these synthetic compounds are either sprayed over or injected into the soil to kill off and thwart the emergence of specific, unwanted plants. One of the early herbicides, 2,4-dichlorophenoxyacetic acid (2,4-D), remains in use globally today. It eradicates broadleaf weeds, including ivy and thistle, while leaving crops such as corn, oats, wheat, and soybeans unscathed.

READ MORE: Fuel for the Future

When deploying herbicides, agricultural workers must follow guidelines for properly sanitizing their spraying systems after each use. With the wide range of spray equipment, herbicides, and cleaning formulas on the market, keeping track of what chemicals require which cleaning process can become cumbersome. Every product possesses a label featuring nuanced cleaning instructions. If a spray system is cleaned incorrectly, metal in the equipment could corrode, tank mixes could become contaminated, and crops could be ruined. This is where the work of ASTM International’s committee on pesticides (E35), and specifically, the subcommittee on pesticide formulations and delivery systems (E35.22), comes into play. The subcommittee is working on a new practice for spray system cleanout (WK72969) that standardizes the steps for cleaning spray equipment. From hand-held and backpack spraying devices to manned and unmanned aerial sprayers and large, four-wheeled units with multiple booms, the work item applies to all types of agricultural spray systems.

“There’s been a need for this practice for some time as the agricultural industry introduces crops that are tolerant to particular herbicides,” says Dan Wright, agricultural formulation technology consultant and a member of E35.22. “If a crop is tolerant to one herbicide but not another, you need to make sure that there isn’t a residual amount of another pesticide in your sprayer that could hurt the crop.”

What propelled the cleanout work item’s creation was the broadleaf herbicide 3,6-Dichloro-2-methoxybenzoic acid, or dicamba. Similar to the herbicide 2,4-D, dicamba was discovered in the 1940s. Registered by the U.S. Environmental Protection Agency (EPA) in 1967, it was intended for pre-plant spraying of soybeans only. However, in 2016, the EPA expanded the application of dicamba to over-the-top/post-emergence of soybean and cotton plants. As a result of this change and of the chemical’s high volatility, non-dicamba-tolerant, non-targeted crops ended up being harmed from spray and vapor drift. Such was the case for Missouri’s largest peach farm Bader Farms, which claimed that dicamba drift had harmed 1,000 acres of its peach orchards, causing the farm to eventually close. Jurors in its lawsuit against German chemical companies Bayer and BASF, which produce dicamba pesticides, agreed, and in February 2020, ruled in favor Bader Farms. 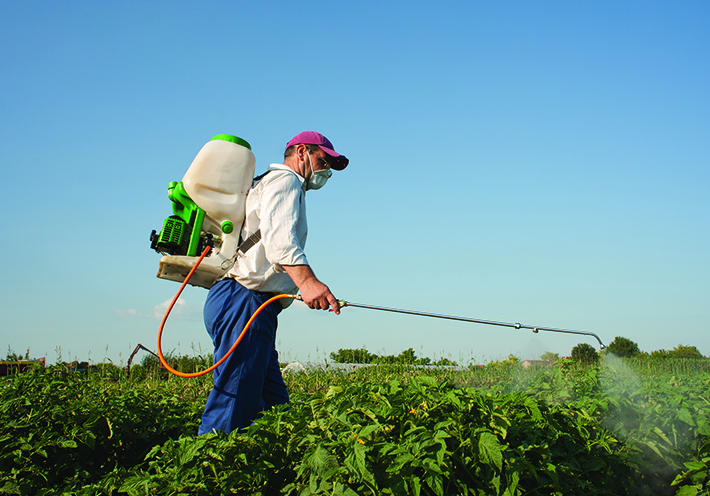 Proper cleaning and sanitizing of spray systems is critical to the agriculture industry.

“Dicamba is a very difficult pesticide to apply,” says Scott Tann, North American business manager for Lamberti USA’s agricultural division. Tann is the chair of E35.22. “If your neighbor is growing tomatoes and you’re doing dicamba-tolerant soybeans or corn, if that dicamba volatilizes and goes across the field—which it can—it damages the tomato plants. Even when you’re not spraying dicamba, residuals of dicamba that might be in your spray tank can wipe out entire fields. It only takes a small amount to decimate non-resistant crops. You have to get the contamination of the previous spray out of the tanks. Dicamba-tolerant crops really brought to the forefront the need for a best practice for cleaning spray equipment. Right now, every label for every pesticide product has to have written instructions on how to clean, but everyone writes different instructions for their labels because there is no reference point. What Bayer writes may be different than what BASF writes, which may be different than what Adama writes. This standard may allow manufacturers to put a statement on their labels’ cleaning section that says, ‘Clean out per ASTM standard.’ Then there will be uniformity, which is a big deal.”

Michael Kenty, a product specialist at Helena Agri-Enterprises LLC who holds a Ph.D. in genetics, concurs with the need for uniformity. He notes that some older labels simply advise users to rinse out the residue and make sure the system is thoroughly clean. These instructions don’t provide much guidance. Large spray systems, which possess recesses and angles in which pesticide residue can accumulate, may require more than a quick rinse to be “thoroughly clean.” He adds that, alternately, some spray equipment may come with 40 pages of directions on how to clean the unit.

“Standardized language on the label that would be utilized by every manufacturer and the EPA would be great,” says Kenty, a member of the subcommittee on pesticides formulations and delivery systems (E35.22). “Remove all the verbiage and make the instructions clear and easy. The endgame is to educate people on how to clean properly and avoid potential tank contamination. What we’re doing may seem pretty simple, but it’s going to have a big impact in this country and globally.”

Although WK72969 focuses on the physical cleaning process, according to Tann and Kenty, a proposed parallel standard will also include a method for evaluating spray system cleaners. As reported in a 2018 article from the University of Nebraska-Lincoln’s Cropwatch, water alone cannot remove dicamba, 2,4-D, or other herbicide residues from a spray system. Additional solutions must be introduced. With a multitude of cleaners available on the market, this new method would enable growers to assess which solutions work best with their systems.

The cleaner evaluation method will not be developed until after the practice portion of WK72969 has been completed.

As they work to refine this new practice, the subcommittee members face a range of issues, including guaranteeing that all parts of a spray system are covered by the standard. To ensure that this happens, they have obtained schematics and diagrams from the manufacturers to illustrate the equipment.

“From hoses to low spots on the boom to screens in the spray nozzles, there are a lot of nooks and crannies in the spray equipment,” says Tann. “It’s not just the tank. You can have residue laying in a tube, hose, screen, or elsewhere. Plus, we have to make sure that all of the materials in the construction of a spray system are actually present in the method that we’re doing. Mimicking and miniaturizing the spray system will be a challenge for the method to evaluate a standard practice for cleaning.”

Another consideration is the number of times that a spray system should be rinsed. Different formulation types—wettable powders, emulsifiable concentrates, water-dispersible granules—may require more or less flushing. In general, three rinses are acceptable.

“As we look at and address different formulation types, there may be a difference of minimum requirements of tank cleaning,” says Danny Brown, senior chemistry manager at WinField United. Brown is also a member of E35’s executive subcommittee (E35.90) and sub-secretary of the pesticide formulations and delivery systems subcommittee. “We’ve done studies where we’ve looked at spray nozzles and lines leading up to the nozzles, and they can have particulates in there that will test high in concentration for certain pesticides. We’re not making a guarantee that, if you follow this practice, you’ll have zero liability. We’re trying to identify best practices for these different scenarios and help to standardize the industry.”

FOR YOU: Standards Promote Sustainable Development

Once growers have followed the practice for cleaning their sprayers, the next concern is what to do with the pesticide-laced rinse. They can’t dump it onto the ground or pour it down a drain. The safe, simple answer is to save the solution and add it to the same herbicide the next time a crop is being sprayed. According to Tann, quandaries such as these will be covered in the proposed standard’s safety and handling sections.

Two more areas of focus are cost and ease of use.

“One of the obstacles is to find an analytical method that doesn’t involve expensive equipment that a small company can’t afford to purchase,” says Wright. “The method has to be available for use by smaller companies. You have to have a good analytical method and clean preparation to avoid cross contamination and it may not be an easy analytical process for smaller providers to run the method.”

Along with crafting the spray system cleanout standard, the subcommittee has been reviewing existing standards to modernize them. Some of these utilize instrumentation that is no longer used as a standard in the industry. Other standards deal with terminology.

“We’re continually teasing out the definitions of what some of these items actually mean,” says Brown. “For example, an anti-foam versus a defoamer. It may seem academic to do that, but with ASTM being a standards body, we all have to be operating under the same knowledge of the standard definition of a word.”

“We try to think about how these terms are used colloquially. What does it mean to the end user and does it align with our understanding of science? I think that we’re taking into consideration the holistic picture rather than just the academic picture, but at the same time we’re staying true to the academic pieces,” he says.

Among the standards recently reviewed is the standard test method for emulsification characteristics of pesticide emulsifiable concentrates (E1116). This test method complements the spray system cleanout practice and is one of the first standards created by the subcommittee. Without good emulsion, problems with using and cleaning the spray tank will occur.

Another standard allied with WK72969 is the standard practice for evaluation of physical compatibility of pesticides in aqueous tank mixtures by the dynamic shaker method (E1518). “If you don’t run the standard test for compatibility, you end up with clogging and plugging and solids that precipitate out,” Tann says. “You want to discover that before you add your spray solution. What we want to clean out of a spray tank is a solution that flows out easily.”

The subcommittee is always looking for new members who can aid in developing standards. For more information about or to become involved with ASTM International’s subcommittee on pesticides formulations and delivery systems, please contact Brian Milewski, E35 staff manager, at bmilewski@astm.org. ■

Kathy Hunt is an East Coast-based journalist and author.