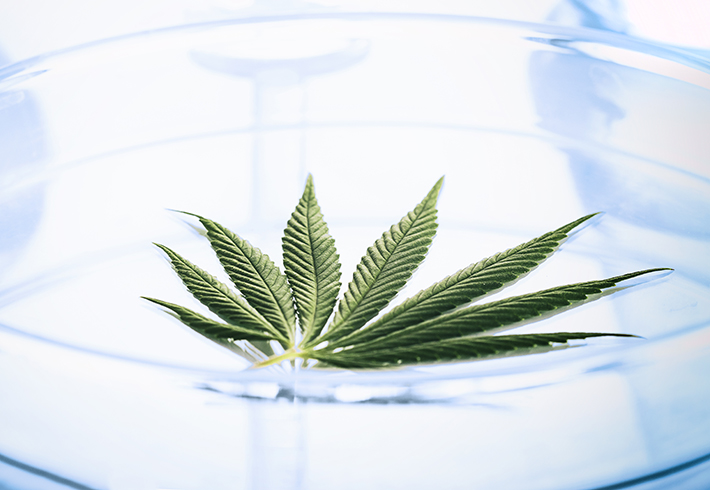 The Safety Equipment Institute and ASTM International are spearheading a new certification program for the cannabis industry that promises to bring greater uniformity and promote growth.
BY:
Jack Maxwell

The history of cannabis, especially over the last 60 years, is intertwined with social and cultural changes that have transformed many aspects of life around the world. And although in some quarters, resistance to the more widespread acceptance of cannabis-related products continues, the numbers speak for themselves. According to one estimate from New Frontier Data, the industry could generate total sales of $23 billion in the United States alone by 2025 — and much more around the globe.

Clearly, cannabis is on its way to becoming the kind of big business many of its advocates have shunned over the years. Yet at the most basic level, marijuana and hemp are plants. Growing them successfully is fraught with the same kinds of challenges facing any farmer who plants a crop and hopes to see healthy green shoots emerging from the earth.

Of course, it’s what’s different about cannabis that presents a challenge to growers, as well as processors, packagers, retailers, and those charged with regulating the industry. For one thing, soybeans, corn, and other traditional crops do not have psychoactive properties. And until recently, cannabis had not been cultivated, processed, and packaged at the scale common to more traditional crops.

In the United States, it was just eight years ago that Colorado and Washington became the first states to legalize the recreational use of marijuana. They’ve since been joined by 10 other states and the District of Columbia. California was the first state to legalize medical marijuana in 1996, and since then, 27 more states have followed suit, structuring their programs in a variety of different ways.

The same trends can be seen around the world. Canada, Georgia, South Africa, and Uruguay have legalized recreational use, and more than 40 countries allow cannabis products to be prescribed for medicinal purposes.

The inconsistent mosaic of laws and regulations in the United States creates a degree of confusion and hampers larger cannabis producers who want to operate in multiple states. To address this problem, a new effort to create a certification program for cultivators, processors, and packagers is taking place within the committee on cannabis (D37).

The History of Agricultural Standards

While many people think of manufacturing, construction, and advanced technology when they think of ASTM International standards, the organization also has a long history related to agriculture. Agriculture-related standards have been developed by various ASTM committees and cover key elements such as infrastructure, field and evaluation equipment, pesticides, and product safety.

The cannabis committee is building on this history. Although formed less than four years ago in February 2017, the committee has been very busy. Its 10 subcommittees have already published 15 standards, and some 70 additional work items are in the pipeline. Perhaps just as important, the involvement of an international standards development organization (SDO) and its consensus procedures have given valuable legitimacy and balance to the cannabis ecosystem.

The American Trade Association for Cannabis and Hemp (ATACH) is one of the leading advocacy groups for the industry. Michael Bronstein is president and co-founder. “We partnered with ASTM International almost immediately as the D37 committee was formed, and we saw a real need to be able to professionalize the industry through standards development,” he says.

“We were overjoyed that ASTM decided to step into the fray and meet the challenge, considering the credibility the organization has with this particular subject matter.” According to Bronstein, the memorandum of understanding (MoU) between ATACH and ASTM was the first such MoU signed by a cannabis/hemp trade group and an accredited SDO.

The work done by D37 has confirmed the wisdom of this partnership. For evidence, look no further than the widely accepted standards for determining (D8196) and maintaining acceptable (D8197) water activity in cannabis flower, two of the committee’s major accomplishments so far — and just two of a number of ASTM standards that underpin the new ASTM Cannabis Certification Program. As outlined below, these are the standards cannabis operators will have to meet in order to achieve certification. 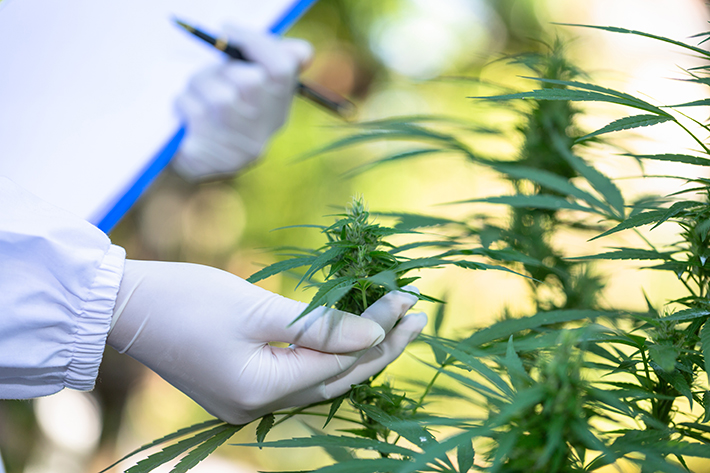 Certifying cannabis growers will create uniformity and help the industry grow in the long term.

When a highly motivated group of stakeholders, working in the well-established consensus-building ASTM International framework, decides that their industry urgently needs a new test method or certification program, things can start moving quickly. The Cannabis Certification Program is an excellent example.

“Thanks to the incredible work of D37, the SEI team, and The GMP Collective, the certification program went from discussion to outline to full-on handbook in just a few months,” says Charlie Rutherford, ASTM consultant and a D37 member. He is also the founder of CPR Squared, a cannabis consulting firm. “We’re in the pilot phase, where we’re taking a handful of license holders through the program to work out some of the finer details, so that a brand wearing the ASTM-certified seal will be rightly seen as an industry leader in quality management.”

Rutherford notes that operators in some states must obtain distinct licenses for each phase of the production process: cultivation, processing (the step during which cannabinoids, terpenes, and other active ingredients are extracted and concentrated for use in products like edibles and tinctures), and packaging. “These could be separate licenses held by the same company,” he says. “We wanted to provide a pathway for any cannabis-touching business to get certified.”

The Safety Equipment Institute (SEI), an ASTM affiliate, will administer the program in partnership with GMP Collective.

Tricia Hock is SEI’s director of certification operations. “Cannabis cultivators, processors, and packagers will become SEI participants, and from there we will work with them to audit their facilities and ensure that they meet industry standards for quality and cleanliness, and are safe and secure,” she explains. “We will also be testing product such as cannabis flower from cultivation facilities to ensure it meets the ASTM standard for water activity.”

GMP Collective works with cannabis and hemp producers to implement strict good manufacturing practices (or GMP). The company was chosen as the audit manager for the program by the ASTM committee members and other stakeholders who developed it. In that role, GMP will conduct the actual audits and manage overall audit traffic.

David Vaillencourt, GMP’s chief executive officer, was instrumental in helping to incorporate key aspects of both good manufacturing and good agricultural practices in the new certification program. He emphasizes the importance of a broad-based, national quality initiative in the currently fragmented cannabis marketplace.

FOR YOU: Two Cannabis Standards You Should Know About

“The major challenge for operators is that they’re required to meet stringent and ever-evolving compliance requirements that differ from state to state,” Vaillencourt says. “However, a quality system is effective and applies across all jurisdictions and operations. Thus it has significant value. Establishing specifications and requirements based on your stakeholders — for example, regulators, consumers, buyers — whether business-to-business or business-to-consumer; documenting these criteria; and showing evidence that you have systems in place to hold your company accountable for meeting these criteria, are what quality systems are all about.”

When it comes to inspecting a cannabis operation, the same basic principles apply as those used during quality management system audits conducted under the auspices of groups like the International Organization for Standardization (ISO). The process will evaluate how an operator handles design changes, inspection of incoming materials and outgoing merchandise, and issues with complaints and noncompliant product.

Vaillencourt describes how that process is designed to work in the context of the Cannabis Certification Program. “We will assess a facility’s best practices by reviewing their documents — policies, procedures, records — walking their facility, and looking for evidence of these documents being followed and appropriately and accurately completed, and potentially interviewing personnel on the floor. All aspects of the production operation plus quality and compliance will be examined.”

Hock says that three other standards from the committee that address security — video surveillance (D8205), access control (D8217), and intrusion detection (D8218) — will be used to determine how well a cannabis facility is protected against theft and unauthorized individuals. In addition, the guide for cleaning and disinfection of a cannabis cultivation center (D8219) will be the benchmark for evaluating a facility’s commitment to maintaining proper levels of cleanliness.

The audit process involves more than a one-time visit. As Rutherford points out, “The biggest weakness of an onsite inspection is that it’s literally a snapshot in time. Many of these facilities are operating 365 days a year. We see one day. What happens on the other 364?” One way the certification program administrators will gain a more complete picture of a facility’s quality performance is to obtain product samples randomly throughout the year and send them to a third-party laboratory for testing.

Audits will inevitably uncover nonconformance issues. However, the purpose is not to assign blame or call out mistakes but rather to drive continuous improvement. The ultimate goal is to ensure that the people who own and manage cannabis facilities recognize the importance of meeting industry standards. “They need to have a demonstrated commitment to quality, with evidence that senior management, regardless of how big or small their organization is, takes quality and product safety seriously,” Vaillencourt says.

The reward? “Upon successful completion of the quality audit and product testing, the cultivator will be able to use the ASTM Certification Mark on their product and marketing materials,” Hock says. “The Certification Mark is an indication to regulators and consumers that this product is safe and was produced at a high-quality cultivating facility.”

Cannabis, like any plant material, can be affected by a variety of contaminants. As the industry continues to grow and expand into additional states, the potential for problems to occur also increases, especially given the current absence of any kind of uniform standards. To list just a few examples:

Agencies that are charged with ensuring the safety of cannabis products being distributed and consumed in their jurisdictions are very interested in the kind of widely accepted standards that will result from the work of the committee on cannabis.

“At the state level, attorneys general and other law enforcement officials, legislators, and regulators are continuing to look at what standards have been developed,” says Bronstein. “The standards development process has been critical to assessing quality control in the industry and promoting public health and safety in ways that regulators are used to seeing.”

He also cites ASTM’s value as a forum for discussion. “The thing that our state-level partners have really valued in the ASTM relationship and with us is that there is a place where they can come and talk about some of the things they’re seeing in their own markets. Then we can figure out a way not only to assist, but also to use those lessons in standards-making and apply them to the regulatory environment.”

The next step in this collaborative process is the pilot program that Rutherford mentions. ASTM, ATACH, SEI, and the Policy Center for Public Health and Safety are working with several cannabis companies to implement the program and evaluate its performance. The results will be presented to members of the bipartisan Cannabis Policy Committee of the National Association of Attorneys General for review and consideration. Their feedback, as well as the experiences of the firms participating in the pilot, will be used to fine-tune the certification program in advance of a wider rollout.