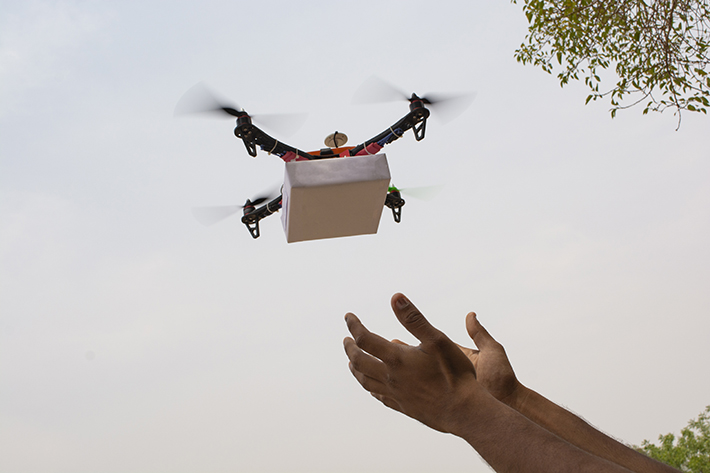 Charting the Future of Drone Delivery

Online retail giant Amazon recently proved that delivery by drone, known formally as an unmanned aircraft system (UAS), is not only possible, but represents the future of last-mile delivery. Introduced in 2016, Amazon’s PrimeAir service will eventually be capable of delivering packages from Amazon’s warehouses to customers in 30 minutes or less using small, unmanned aircraft.

And they are far from alone. Google is working on a service called Wing that will use UAS to deliver packages, while established players like UPS and Domino’s Pizza have also begun investing in this technology. Even the ongoing COVID-19 crisis has added to demand for UAS services as consumers look for new, contactless delivery options for the products they need.

Unmanned aircraft services tout lower costs for delivery, improved reliability, and even reduced carbon emissions as benefits, and may well open the door to a future in which on-demand delivery of consumer products is the norm.

However, the push for UAS delivery brings new challenges for operators and manufacturers alike. For one thing, operating a UAS in a populated area brings new risks that do not exist with traditional, piloted airplanes. Namely, if something goes wrong in flight, how can the safety of those on the ground be assured? How can operators track and identify their drone from a long distance – or ensure that it operates safely beyond visual line of sight? As UAS delivery expands, the need for robust, consistent parameters for their operation becomes more urgent, and the need for uniform standards such as those being developed by standards development organizations like ASTM International becomes essential to future growth.

Tasked with addressing issues related to the “design, performance, quality acceptance tests, and safety monitoring for unmanned air vehicle systems,” ASTM’s committee on unmanned aircraft systems (F38) works with drone manufacturers, government agencies, aircraft designers, and others to ensure that UAS can operate safely and consistently in populated airspace all over the world, as new uses for this technology continue to expand.

“We're targeting those areas that allow for the safe integration of UAS into any civil aviation airspace,” says committee chair Phillip Kenul, senior vice president with Trivector Services. “So what we're looking for are ways to expand operations for UAS. We want to integrate these aircraft, not segregate them.”

To do that, Kenul’s committee is focused on three functional areas: drone hardware and design, flight operations procedures, and personnel training.

“With manned aircraft you have the air traffic management [ATM] system overseeing those flights, but UAS does not at this time necessarily fit into a traditional ATM system,” Kenul explains. “One of the reasons is that, with a manned craft you have a human onboard who can see and avoid obstacles, but with unmanned systems you have to work around that to duplicate what’s called ‘detect and avoid.’”

FOR YOU: The Promise of Urban Air Mobility

The ultimate goal for UAS, whether used for delivery or other functions, is to integrate these aircraft into the existing airspace by designing aircraft that are safe and reliable; that can be flown beyond the visual line of sight from a ground operator; that have risk mitigation in place; and that are capable of detecting and avoiding hazards without a human onboard. Kenul cites two of his committee’s standards in particular as helping to meet the needs of the UAS industry:

Small and relatively inexpensive compared to large, manned aircraft, UAS platforms do not typically include all of the redundant safety systems that you find in an airplane. So one of the most effective risk mitigators for these drones is a parachute that can arrest an aircraft that fails in flight and protect those on the ground from harm. This standard covers the design and manufacture of deployable parachutes, as well as the test requirements for these systems.

This new standard covers the performance requirements for remote identification (Remote ID) of unmanned aircraft systems and allows for the operation of UAS beyond line of sight. Remote ID allows governmental and civil identification of UAS for safety, security, and compliance purposes. The objective of the standard is to increase UAS remote pilot accountability by removing anonymity while preserving operational privacy for remote pilots, businesses, and their customers.

Standards such as these will assist global regulators and legislators alike as they seek to swiftly and safely integrate UAS technology into their airspace and their economies. And more is on the way.

“Manned aviation has been around for 117 years at this point, and the UAS industry is only about 20 years old,” Kenul says. “In those 20 years we've moved rapidly along in the development of unmanned systems, but there are a couple of areas that are technologically challenging, including getting beyond visual line of sight capabilities. That’s where technology needs to develop as we move forward and that’s what we’re working on next in our committee.”