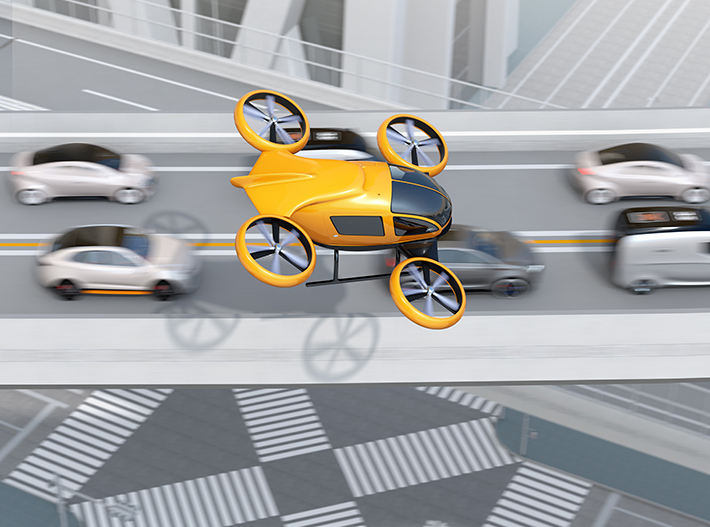 Drones Move Into the Mainstream

From remote ID to air traffic management, the future of unmanned aircraft is taking shape.
BY:
Kathy Hunt

In recent years, the world has witnessed a surge in the number of unmanned aircraft systems (UAS) taking to the air. Commonly referred to as drones, these pilotless air vehicles have been embraced by millions, from hobbyists to commercial businesses to military personnel.

Versatile and efficient, UAS can perform a wide range of tasks: filming, package delivery, meteorological research, aerial surveillance and inspection, search and rescue, and more. UAS can also perform tasks that spare workers from dangerous environments, including hard-to-reach areas, unstable structures, and sites with high levels of toxins or radiation.

The reach of these systems is profound. According to a 2019 report from Bard College’s Center for the Study of the Drone, UAS can now be found in 95 countries, while just 10 years ago, they were in 60. Meanwhile, the European Investment Bank, the lending branch of the European Union, predicts that by 2022, the number of mass-market drones will reach 35 million globally, with roughly 3 million in the United States alone. Of the 35 million, 75% will be used in commercial endeavors.

This widespread UAS growth can only mean one thing for our skies: increased traffic, with small, remotely operated vehicles vying with larger, manned aircraft for airspace. In this busy, complicated environment, managing air traffic and maintaining safety and security are essential. This is where ASTM International’s committee on unmanned aircraft systems (F38) currently plays a pivotal role.

FOR YOU: Autonomous Flight

Comprised of representatives from industry, academia, professional societies, and government agencies, the committee has developed more than two dozen standards to further UAS design, performance, quality, and safety over its years of work.

Recently, the committee has focused on remote identification and tracking of UAS as well as UAS traffic management (UTM), and at the end of 2019, the highly anticipated specification for remote ID and tracking (F3411) was released. This standard increases UAS pilot responsibility and allows governmental and civil identification of UAS for reasons of safety and security. The standard also provides a voluntary means of compliance for the UAS field and supports an array of drone types and operators.

Remote identification can be likened to a “digital license plate.” It helps law enforcement, security, and aviation officials identify a drone flying recklessly or in a prohibited area, such as too close to an airport.

“A lot of the problems occurring with UAS aren’t nefarious. Generally, it’s the clueless and careless that cause problems. You do have a third category, the criminal. Remote ID helps public safety officials know whom they should pay attention to. Someone who disables his remote ID will stand out a little more,” says Gabriel Cox, principal engineer at Intel and chair of the work group that developed the standard.

He points out that a serial number format for drones already exists: small unmanned aerial systems serial numbers (CTA 2063). Created by the American National Standards Institute (ANSI) and overseen by the International Civil Aviation Organization (ICAO), it consists of a four-digit company ID and 15 additional characters of a serial number. Both the European Union and the U.S. Federal Aviation Authority (FAA) reference this identification format.

Remote ID removes the anonymity of the drone and its pilot. Similar to a traditional vehicle license plate, UAS remote ID establishes accountability. The ID shares information when necessary and does not infringe upon the privacy of the UAS operator, associated businesses, and clients.

In addition to the remote ID itself, a means to gather and share UAS information must be in place, and the standard addresses this need as well. According to Philip Kenul, chair of the committee on unmanned aircraft systems and retired core admiral with the U.S. National Oceanic and Atmospheric Administration (NOAA), the standard was developed so that one could download a smart phone app and access the UAS information from the network in real time. For drones without network capability, the Wifi or Bluetooth signal could be picked up and tracked through the app. 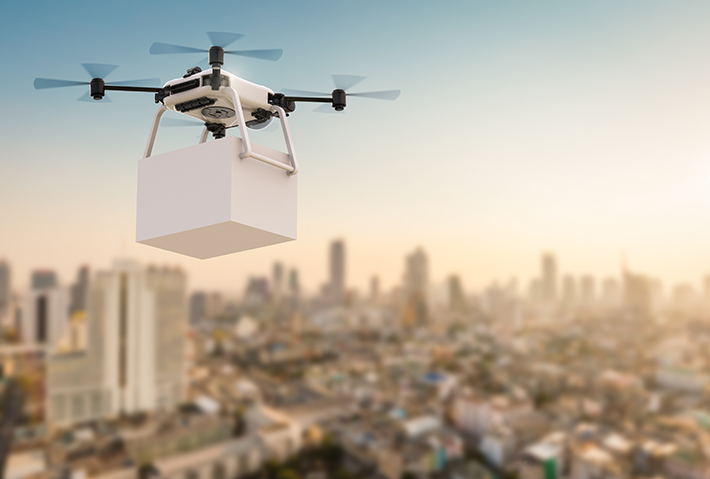 The future is here: Drone delivery will soon be a daily reality.

In order to track a remote ID, the means for disseminating information must be in place. The F3411 standard covers transmission methods as well as minimum performance requirements for two forms of identification: broadcast and network.

Using either Bluetooth or Wi-Fi, broadcast remote ID continually transmits radio signals. These signals provide the unique identifier of the UAS as well as its altitude, longitude, and latitude. With broadcast remote ID, there is no specific recipient. Any receiver in the vicinity of the UAS can obtain this data.

In the United States, the FAA Notice of Proposed Rulemaking for Remote Identification of Unmanned Aircraft Systems from Dec. 31, 2019, published guidelines on who must adhere to remote ID. With the exception of UAS weighing less than 0.55 pounds (0.25 kg) and certain amateur-constructed UAS and U.S. government drones, all UAS subject to FAA registration requirements will be expected to transmit a remote ID. For those hobbyist-built UAS and UAS produced prior to the compliance date, flight can only take place in set geographic areas. If drone operators own multiple UAS, each one will need to be registered individually.

By enabling authorities to identify UAS pilots and by establishing a built-in system of pilot answerability, the F3411 standard will allow for more operational privileges: If you know that you can trust the UAS operator in question, you will ease some of the stricter regulations for them. Under the standard, these privileges include UAS operations taking place at night, over people, and beyond visual line of sight (BVLOS). Because a smaller drone will disappear from view faster than a larger one, there is no exact distance for BVLOS.

ASTM International does have a standard pertaining to BVLOS: the practice for seeking approval for BVLOS small unmanned aircraft systems (F3196). The standard focuses on small UAS (sUAS), those possessing a maximum total weight of less than 55 pounds (25 kg), whose operators are seeking permission from a civil aviation authority to fly BVLOS.

“You want to be able to operate miles away from the observer, but certain things need to be in place, such as detect-and-avoidance of other aircraft. Only then will you safely be able to go beyond visual line of sight. This is one of the most challenging things the world of UAS is facing,” says Kenul.

He adds that two detect-and-avoidance work items were begun by the subcommittee on airworthiness (F38.01) to establish performance requirements and test methods for the detection and avoidance of manned aircraft by UAS, BVLOS.

“When detect-and-avoidance capabilities are fully mature, only then will you be allowed to get beyond visual line of sight,” Kenul says.

In June, the committee approved one of the work items, now the specification for detect-and-avoid performance requirements (F3442). The other work item, WK62669, will define test methods for detect-and-avoid systems and sensors for sUAS to allow them to go BVLOS. It aims to protect manned aircraft operating at lower altitudes and reduce the number of waivers sought for sUAS BVLOS.

The flight operations subcommittee (F38.02) is working on UAS traffic management (UTM), which goes hand in hand with remote ID and tracking as well as detect-and-avoid requirements. The FAA defines UTM as a “’traffic management’ ecosystem for uncontrolled operations that is separate from, but complementary to, the FAA’s Air Traffic Management (ATM) system.” Because of the increasing diversity, capabilities, and sheer numbers of UAS, the traditional ATM element of voice communication between the pilot and air traffic control is not feasible.

To address UAS traffic control, the subcommittee has drafted a standard for service provided under UAS traffic management (UTM) (WK63418). The proposed performance-based standard will cover an array of complex capabilities such as the integration of manned flights, management of priority flights, and the use of UTM for urban air mobility. It begins, however, with such cornerstone capabilities as the handling of airspace constraints and strategic coordination.

An airspace constraint is anywhere that a drone cannot fly without special permission. This could be anywhere from a wildfire to the landing zone of an emergency medical services helicopter. Strategic coordination deals with detecting conflicts and conformance monitoring. The latter checks ongoing position reports to determine whether a drone is following its flight plan. If the drone deviates from its assigned path, conformance monitoring will coordinate with affected UAS service providers (USSs) to avoid conflicts and accidents. All of this is carried out using computer systems.

Through these network transmissions, the UTM work item and remote ID and tracking standard are tied together.

“We built the remote ID and tracking standard in collaboration with and parallel to the UTM standard. A foundational element that’s built into remote ID, the discovery and synchronization service (DSS) also goes into UTM. DSS is how everyone can communicate through the network and see where everyone else is, and it’s required in both,“ Kenul says.

DSS facilitates the transfer of information between drones operating in a shared airspace. Remote ID and operational intent would be part of these communications.

Co-chair of the work group for WK63418, Mike Glasgow explains that the discovery portion of DSS notifies the USS of other service providers with which it needs to exchange information. Sharing data results in a complete picture of the airspace in which the UAS would fly. The DSS also has a mechanism to ensure that the USS obtains the entire airspace picture before it creates a new operation.

For the layperson, Glasgow likens DSS to a type of intelligent phone book. “A USS can ask, ‘Who has data of a certain type in this area?’ The DSS can respond with, ‘These three USS have data in that area and here are the URL’s at which you can reach them,’” says Glasgow, who works in UTM Standards and Architecture at Wing.

The aim of UTM is to keep the airspace safe while also increasing operational privileges. With UTM in place, multiple drones would be able to fly BVLOS at altitudes below 400 feet (122 m) in areas where FAA traffic services do not exist. This would also apply to airspace around the world.

“We want to make this an international standard and not a fragmented standard,” says Amit Ganjoo, co-chair of the work group for WK63418 and CEO of ANRA Technologies. “To do this, we focus on the underlying technical interchange.”

Both Ganjoo and Glasgow note that interoperability is key to UTM’s success. This can be achieved by defining the protocols used by UAS service suppliers to exchange information, a major focus of the working group.

“This proposed standard is a key example of industry, regulators, and ANSPs around the world working well together to achieve foundational capabilities for UTM. We are hopeful that the global aviation community will embrace the work item and our committee’s standards to support the integration of UAS and harmonization across the ecosystem,” says Glasgow. ■