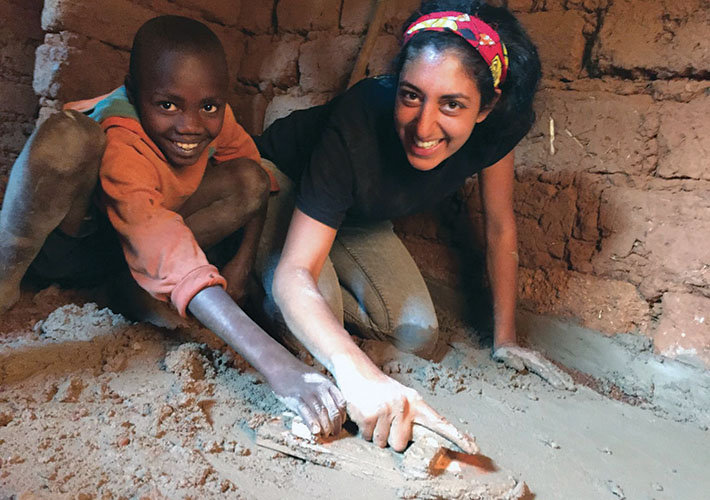 A proposed standard for earthen floors could help promote sustainability and improve health in the developing world.
BY:
CICELY ENRIGHT

Earthen floors can be found around the world, where they’ve been used as natural and affordable options for hundreds of years.

Some floors today use a tamped base layer of materials (such as laterite or caliche) and are topped with a mixture of fine sand and clay. Then, crucially, they are sealed with natural oils such as linseed or flax.

For some, this approach is attractive because it means a move toward greater sustainability. For others, it’s the do-it-yourself aspect that holds appeal. And for some of the world’s poorest, a well-built earthen floor — the subject of an ASTM International guide now underway — means a healthier alternative to plain, unstabilized earth.

The Need for Cleaner Floors

In contrast to earthen floors, “dirt floors make you sick,” says Gayatri Datar (pictured above right). Datar is co-founder and CEO of EarthEnable, an earthen floor-building company active in Rwanda, with an eye toward additional projects in Uganda and beyond.

Her work began when Datar and her team traveled to Rwanda as part of a “Design for Extreme Affordability” class at Stanford University. The multidisciplinary, project-based course aims for its participants and partners to transform the lives of some of the world’s poorest.

While in Rwanda, the team dug into housing-related problems. Complaints about muddy floors from leaking roofs led to the discovery that dirt floors resulted in a higher incidence of disease. By contrast, a well-built earthen floor, according to a World Bank study, reduces childhood diarrhea by 49 percent and parasitic infections by 78 percent. As Datar puts it, “Generally, a cleaner floor can drastically improve health.”

Their findings put the Stanford team on the hunt for an environmentally friendly varnish (no volatile organic compounds) to seal a floor made of tamped substrate with clay and sand over it. EarthEnable co-founder Rick Zuzow, a Ph.D. candidate in biochemistry, developed the varnish.

Six years have passed since the trip to Rwanda. Now, EarthEnable trains and employs many Rwandans full-time. According to Datar, 10,000 people with earthen floors in their homes have already been positively impacted, with a goal of 10 million by 2025.

Datar is now focused on spreading this life-changing work elsewhere in the world. That’s where ASTM International comes in.

As a result, Datar has started an earthen floor standards activity in the subcommittee on buildings and construction (E60.01), part of the sustainability committee (E60).

At a meeting a few months ago, the subcommittee heard Datar present about her organization’s efforts. She also shared an initial draft of a standard guide for design of earthen floors (WK64123), and the attendees discussed possible additions and enhancements.

The proposed standard is to include technical performance and design considerations for earthen floors. Datar says that test methods could become part of this or other standards. The possibilities include tests for bearing capacity, surface wear, water resistance, and loading. (See sidebar for information about another earthen standard from 4)

C. Michael Donoghue, P.E., Maritech Engineering and an E60 member, says that earthen materials have few written, teachable standards and guides. He adds, “Gaya’s initiative is not just a Rwandan thing. It fits right into our initiatives, and we hope to do what we can to aid her work. Low carbon, good indoor air quality, and thermal resilient construction is clearly something of global interest and an increasing necessity.”

Donoghue notes that the MujerArtes studio in San Antonio, Texas, has an earthen floor as well as compressed-earth block walls. He says, “We’ve been working with the City of San Antonio on the development of local amendments to the International Building Code to allow the use of standards-based, engineered earthen construction.” That includes floors.

Additional input for the standard and its contents will come from a number of sources. “We still need to get input from the hundreds of experienced earthen builders across the world to incorporate research they have already done,” says Datar.

The subcommittee is continuing its work on the standard with meetings in the coming months, moving another step closer to a globally-recognized standard that could improve the health and well-being of millions of people around the world.