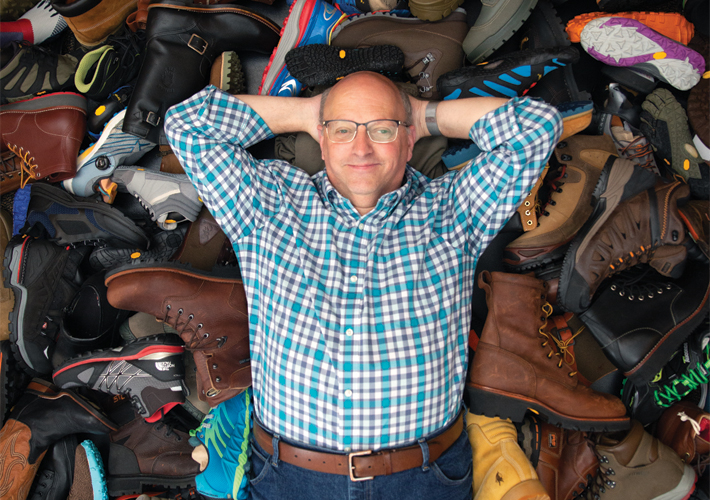 Growing up in Chelsea, Massachusetts, a young William “Bill” Ells probably would not have seen a successful career in the footwear business as his likeliest career path. In those days, he was busy as an altar boy in the same town where he’s a cantor to this day. However, eventually the field of footwear did come calling.

While working at a retail lumber yard near his hometown of Chelsea, Ells received a tip that there were jobs available at a rubber factory nearby. The rest, as they say, is history. It was on this job search that Ells met the man who would become his mentor in the footwear field. On that fateful day, he told a young Bill: “Kid, if you get into the footwear business, you’ll never get out.” Ells says with a laugh, “It’s 41 years later and I’m still here.”

Now vice president of sales with Vibram USA, he has been with the company for over 20 years, involved in the design, development, and production of footwear and sole materials for military, industrial, and outdoor use. Ells joined ASTM International and its pedestrian/walkway safety and footwear committee (F13) in 1998. He is currently a member of the F13 executive committee and has served as its vice chair and as a subcommittee officer. In 2013, the committee honored Ells with the Award of Merit for his service and commitment to safety standards for footwear. He has also received a Service Award and Outstanding Leadership Award for his term on the Committee on Standards.

FOR YOU: Gaining Traction

Q. Tell us about your work with Vibram and how you came to be involved in the field of outsole manufacturing and distribution.

A. A little over 41 years ago, I was working with a gentleman in a retail lumber yard, and he just happened to say to me, ‘Hey, my dad runs a rubber company in the town that you live in. You should go meet him.’ I was actually thinking of going to work for Weyerhaeuser and wanted to get on the road. And that was how I met my business mentor Bill Foshage and how I got into the shoe business. I remember that Saturday morning, he said to me, ‘Kid, if you get into the footwear business, you’ll never get out.’ It’s 41 years later and I’m still here.

Q. What is the most rewarding part of working in your industry? What are some of the challenges you face both personally and as an organization?

A. The most rewarding thing about what we do is when you see the final piece of footwear. Yes, we manufacture soles across the street from where we’re sitting today, but the reality is, when I walk down the street or I’m in an airport and I see a service member go by with his or her boots on and I see that Vibram logo, there’s a lot of pride that goes with it. Our brand has found its way to the top of Mount Everest. It’s found its way across mountainous terrain, city streets, and battlefields. So at the end of the day, it’s when we see our brand, and that person is also a partner.

Q. How have you seen your field change, both technologically and in general? What are some of the major advances that have been made?

A. 40 years ago, there were 440 shoe factories in the U.S. Today, we have about 10% of that number. I saw the great demise of the domestic footwear industry. When I started 41 years ago, there was so much focus on the domestic industry. I think people didn’t have the foresight at that time to understand that the performance product would end up leaving the contiguous 48 states. The fact is
it did move, and it moved quickly. It was almost a violent shift. But you have to go where the business takes you. 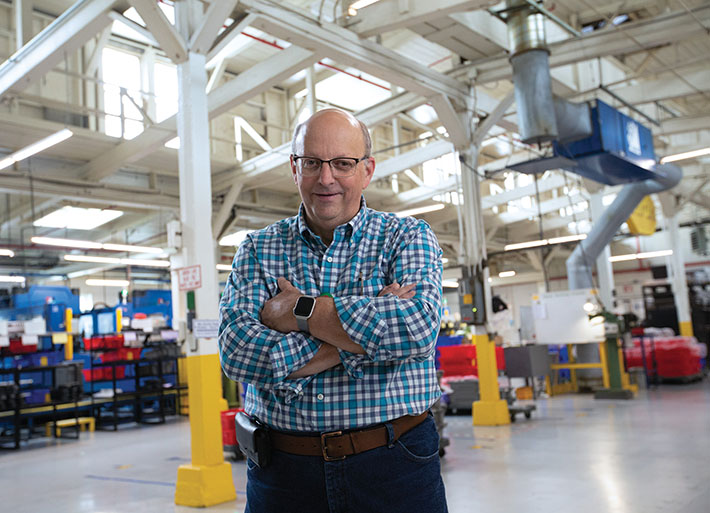 From a technology standpoint, when I started, sketches were done on a pad; blueprints were done pretty much by hand. Today, with CNC cutting, with 3D modeling, all of these things have just made us better, and have shortened the lead time for what we do. Technology has advanced with polymers and compounding methods. We make a product now that’s engineered for improved slip resistance on wet ice. Fifteen years ago, I don’t think anybody thought that would be possible. But through it all, the need for standards, the need for quality, the need for endurance has persevered.

Q. How important are standards to the footwear industry, and what are some of the ways standards make footwear/outsoles safer?

A. Safety footwear can be used by an electrician as an example, or someone working on a job site or working in an automotive factory. And there are standards. What happens if you step on a live wire? What happens if a 75-pound block of steel happens to drop off a bench and hit your toe? If you’re walking around where there are shards of glass and nails? Those are all things that are in safety footwear standards. And then of course, the pinnacle of all: What happens with slip resistance? The outsole and the floor are two things that constantly get married together. They both have to work together. I’m standing here in the middle of our design center. Our designers are always looking for ways to enhance angles and texturing and compound to make the utmost slip-resistant type of product.

I can assure you that prior to standards, people didn’t have the safety factors in their footwear that they have today. You may have had a shoe that couldn’t take that weight of that 75-pound load that drops on your foot. Think about what could potentially happen. You see people that work up in the bucket trucks after a disaster, those men and women need protection, and that’s what standards do. And in my 40-plus years, I’ve seen those standards evolve. We have a great group of people that are just dedicated, like so many members of ASTM, to bringing forward the best standards that we can.

“I know working in consensus committees has broadened my horizon, has taught me many things, and I’m hopeful that the younger people within our industry or even those that are a few years on have that same experience.”

Q. 2023 will mark 25 years with ASTM International for you. How important has ASTM been to your career, and how important are membership organizations in general in your line of work?

A. I remember my first meeting. I walk into a room, there’s 150 people. I have no idea what consensus standards are about. And I see hands going up and hands going down and things that are persuasive and non-persuasive. But once you sit there and you analyze it, it’s amazing the knowledge that’s in the room. I know working in consensus committees has broadened my horizon, has taught me many things, and I’m hopeful that the younger people within our industry or even those who are a few years on have that same experience. And that’s where I think mentorship is so critical to what we do. When somebody walks in the room for the first time, this is so new to them. And mentorship takes on a couple of different forms. You can be the mentor to somebody coming in the door and that same person can eventually mentor you by broadening your horizons, your education, your knowledge. It works both ways.

Q. ASTM is celebrating its 125th anniversary in 2023. What has ASTM meant to the standards community over the years, and what does it mean to you to be chair during such a historic year?

A. Well quite honestly, it’s humbling. I’m honored to be the chair in this year. As one of ASTM’s past chairs said, it’s all about servant leadership. Like anybody else within ASTM, all 30,000 members are here to serve a greater good. We all do it as volunteers. We have a process that’s stood the test of time. And at the heart of what we do is consensus building. Everybody has a say, and that is critical to standards development just as it has been for 125 years. And I fully expect, as many other people do, that it will be for another 125 years and then another 125 years after that. It’s a formula that’s worked and it works well.

Q. What advice would you give to an early career professional considering joining ASTM?

A. I’d say don’t even think about it, just do it. Because when you get involved and you make the connections and you grow your knowledge base and become part of a larger good, the rewards are just unbelievable – for you personally, for me personally, for people’s careers, education. The ability to network alone within a committee of 400 or as many as 2000, as we have in some of our committees, is just immeasurable. And in the end, you’re providing a service to those who rely on standards, whether they’re for aviation fuels, amusement park rides, or footwear. Any of those things and many more within the 148 committees and our 30,000 members – that’s just an unbelievable combination. ■