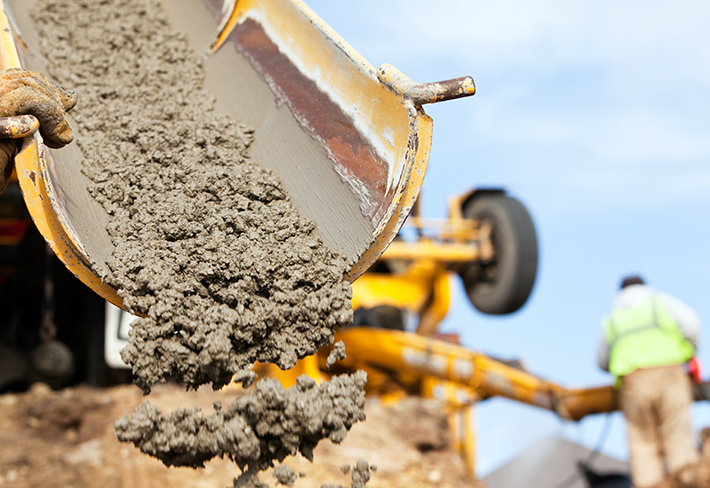 New standards are being developed to keep pace with the rapid evolution of cement and concrete technology.
BY:
Jack Maxwell

It can be easy to take concrete for granted. This versatile building material is so familiar, such an ubiquitous presence in the built environment, that we sometimes stop paying attention.

Of course, industry professionals who are looking for ways to improve the economics and performance of concrete, and to reduce its environmental impacts, are paying attention. They are developing new concrete materials and mixtures, applying cutting-edge nanotechnology to improve the material’s compressive strength and ductility, and finding new ways to incorporate recycled materials into the final product.

This work is pointing the way to a greener future for concrete, but getting there will require wider acceptance by the construction industry. One of the keys to this acceptance is establishing material specifications, test methods, and other new standards that give end users the confidence to choose alternatives to traditional approaches. This is where ASTM International comes in.

FOR YOU: Building with Hempcrete

The committee on cement (C01) was formed over 100 years ago, in 1909, and covers portland and blended cements. The concrete and concrete aggregates committee (C09) dates from 1914 and handles supplementary cementitious materials (SCMs). The two groups meet at the same committee weeks twice a year, and many members are active in both.

Standards published by these groups have paralleled new developments in concrete technology over the decades. Now, in an era where continuous improvement in data collection, computing power, and global communication are helping to accelerate the development of new concrete products and technologies, the ability to establish related standards is more important than ever.

One of the first things an internet search uncovers when you plug in “concrete” is this startling fact: After water, it is said to be the most widely used substance on earth. Another statistic: Nearly three-quarters of the world’s population lives in a structure that includes some form of concrete.

“Concrete is the most widely used construction material globally, with over one ton used per person annually,” notes Doug Hooton, Ph.D., professor emeritus in the department of civil and mineral engineering at the University of Toronto and chair of C01. “It is popular because it can be made with local materials, can be formed into any shape, is resilient (to fire, major storms, etc.), and is durable when properly designed and constructed.”

According to the Global Cement and Concrete Association, 14 million cubic meters (approximately 18 million cubic yards) of concrete were produced in 2020. The consulting firm Allied Market Research estimates the global concrete market generated over $617 billion USD that same year. Given continuing growth in developing economies worldwide and new commitments to infrastructure spending in the United States, this figure is expected to reach close to a trillion dollars by 2030.

Given its versatility and durability, it’s no surprise that concrete is so omnipresent. However, despite its many positive attributes, concrete also comes with environmental costs. To better understand this issue, and the innovative ways the industry is working to address it, it is helpful to understand how concrete is made.

Many people think of concrete and cement as one and the same, but that is not the case.

Concrete is the end product, a relatively uncomplicated material comprising only a handful of ingredients: water, aggregates (such as sand, gravel, and/or crushed stone), and cement. Note that cement is an ingredient of concrete, the material that chemically reacts with water and holds the other components together. Hooton calls it “the main binder and the backbone of concrete for more than two centuries.”

There are many types of cement, but the most common is portland cement (named for its resemblance to stone quarried on the Isle of Portland, in England). ASTM’s standard specification for portland cement (C150/C150M) covers 10 different types for specific applications.

The primary building blocks of that formula are limestone and clay, while other ingredients can include shells, chalk or marl, shale, slate, blast furnace slag, silica sand, and iron ore. Transforming this mixture into a usable form is very energy intensive — and therein lies the environmental challenge.

“To manufacture portland cement, producers mix limestone rock, which is mostly calcium carbonate, with clay or shale and process it through a kiln at very high temperatures,” Hooton explains. “In the kiln, the calcium loses its carbon, which is driven off as carbon dioxide gas, and then combines with silica, alumina, and other elements in the clay to create clinker — the precursor to cement. Portland cement is then made by grinding clinker together with gypsum into a fine powder.”

The environmental implications of this process are twofold. One is the carbon dioxide (CO2) gas emitted during the kiln reactions, the other is emissions from the fossil fuels burned to heat the kiln. The result, says Hooton, is “For every kilogram of cement clinker produced, a nearly equivalent mass of CO2 is emitted.” 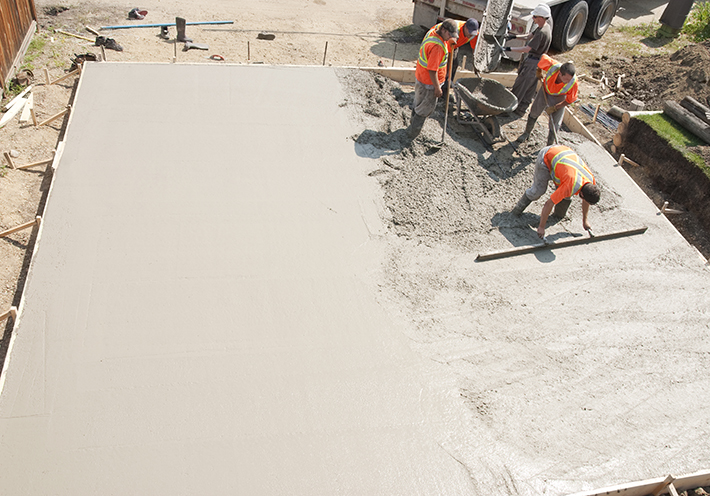 The rapid development of new cementitious materials has led to the need for new standards.

Understanding the role of clinker in concrete production leads to a pretty straightforward conclusion: Reducing clinker content is a good way to decrease the carbon footprint of cement, and ultimately of concrete. ASTM standards are an important tool in achieving this goal without adversely affecting concrete properties.

Cutting the amount of clinker required to manufacture concrete requires replacing a portion of the portland cement with alternate materials. One source of such materials is, figuratively speaking, the recycling bin.

“Recycled products are highly encouraged for use in concrete, and we have been doing that for decades in the form of fly ash, slag cement, and silica fume,” says Richard Szecsy, Ph.D., chief operating officer of Charley’s Concrete, and chair of C09. “In the last 10 years we have also included recycled aggregates, recycled water, and returned concrete.”

Pozzolans are a broad class of both naturally occurring and industrially derived SCMs that, when finely ground and mixed with cement or other sources of calcium, react chemically to form compounds with cementitious properties. Recycled ground glass is an example of a manmade pozzolan and is covered by the standard specification for ground-glass pozzolan for use in concrete (C1866), published in 2020.

Not all recycled glass is created equal, however. “Certain sizes, certain chemical compositions, can be problematic,” notes Szecsy. “It’s not that they can’t be used, it’s just a more complex process than simply adding 10 kilograms to a load of concrete. This is why ASTM is so important. Allowances for new ideas, material use, et cetera, are welcomed, they just have to be vetted through the well-established ASTM process.”

Hooton points out that there are many sources of naturally occurring pozzolans in addition to the recycled materials described here. “C1897 is important for evaluating the pozzolanic reactivity of these materials, which can vary widely due to different geology.”

Blended cements are another option for reducing the environmental impact of concrete. ASTM C595 is the relevant specification.

“C595 is a key standard for blended cements,” says Paul Tennis, Ph.D., senior director of research and product standards at the Portland Cement Association, referring to the specification for blended hydraulic cements. “The industry is actively engaged in encouraging the use of portland-limestone cements (Type IL), as defined by C595. They are widely available and can have up to 10% lower CO2 footprints than ordinary portland cements, while having similar strength and durability characteristics.”

Hooton adds that Type IL cements can be used together with separately added SCMs or in a plant-blended cement (Type IT) to further reduce clinker content of the binder and thus the carbon footprint of concrete. Szecsy emphasizes that the use of these materials and their effects on the final concrete product were examined carefully during the rigorous ASTM standards development process. “Part of that process is to make sure the standard’s impacts to the user are fully noted, realized, and capable of being measured,” he says.

The Promise of Nanotechnology

Improving the environmental profile of cement, and by extension concrete, is a primary focus of the industry. In the United States, the Portland Cement Association’s Roadmap to Carbon Neutrality by 2050 was released at the same time as “Concrete Future: The GCCA 2050 Cement and Concrete Industry Roadmap for Net Zero Concrete,” published by the Global Cement and Concrete Association — proof of the international level of commitment to this objective. Efforts to decrease the carbon footprint of cement and concrete, like those described here, fit within this framework.

These initiatives, however, are not the only exciting developments in concrete. Another is nanotechnology, defined by the U.S. government’s National Nanotechnology Initiative as “science, engineering, and technology conducted at the nano scale, which is about 1 to 100 nanometers.” (A nanometer is approximately one-billionth of a meter; put another way, there are about 25 and a half million nanometers in one inch.)

In the context of concrete, improvements in compressive strength and ductility can be realized through incorporation of nanomaterials. “Nanotech is truly cutting edge technology,” says Szecsy. “I don’t think we are anywhere near understanding its potential. This is a lot like computer chips, in that the speed of development with nanotech is faster than our ability to capture its uses and measurements within governing documents, which is a great problem to have.”

Hooton highlights research being done into the ways nano-carbonates, graphene, and nano-silica can improve cement hydration and particle packing. Efforts to address the use of these additives are in progress on the standards side as well. For example, the draft specification for colloidal silica for use in concrete (WK60809) is currently examining the use of this nanomaterial.

“In its purest form, colloidal silica is a nanotechnology with silica particles, ranging in diameter from 1 to 100 nm, that remain evenly dispersed throughout the solution, without settlement or sedimentation for a significant time,” explains Jon Belkowitz, Ph.D., chief technical offer of the firm Intelligent Concrete and a member of C09. “The silica particles can be manufactured with specific particle size distributions, or silica content, or both, to meet a variety of applications.”

READ MORE: The Many Lives of Copper

An example of the kind of improved performance nanotechnology can deliver is ultra-high performance concrete (UHPC). “This concrete does not use coarse aggregate,” Hooton says. “Together with polymeric chemical admixtures, it combines portland cement with fine pozzolans or inert powders to optimize particle packing down to the nanoscale, providing very high compressive strengths and excellent resistance to ingress of aggressive fluids. UHPC also often includes micro-fibers that provide high flexural strengths and ductility, which can eliminate or reduce the need for reinforcing bars. Its properties are approaching those of structural steel.”

Szecsy echoes the sentiment, noting that, after safety, speed is the next most critical aspect of every construction project. This need for speed drives demand for cutting-edge technologies like colloidal silica and UHPC, and highlights ASTM’s key role in supporting more widespread adoption of these new options.

“The biggest challenges with new and emerging technologies are universal classification and measurement,” he says. “This is where ASTM once again proves its position as a global leader in standards and specifications development. Whether it is a new product or test method, the ASTM documents are the roadmaps, the boundaries for those technologies to become accepted. The ASTM specifications and standards are the unifying element.”

Szecsy concludes with a plug for individual and corporate participation in committees. “There are so many companies that rely on C09 and C01 standards and specifications. All of them should have a voice in the documents that govern our industry,” he says. “Companies have to realize that the financial support and investment for participation within ASTM is not something that can be measured with an ROI the same as a piece of equipment. It is an investment to make sure that there is a continued development and balance with the documents that quite literally govern our business.” ■