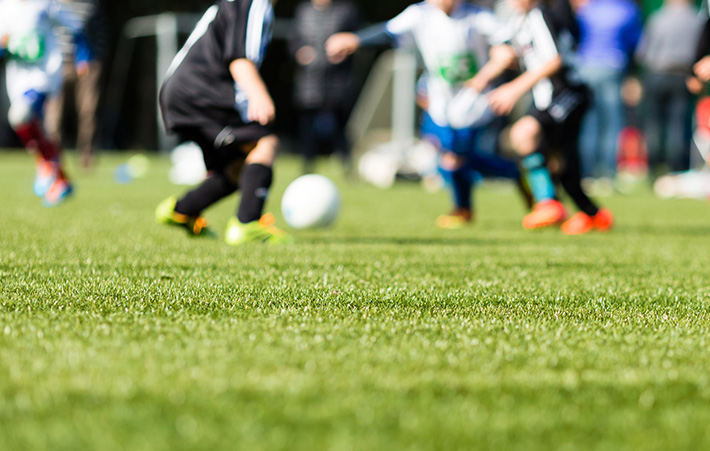 Safety Is the Goal

Around the world, countries on every continent are slowly beginning to reopen, emerging from months of lockdowns and isolation due to the COVID-19 pandemic that has cost the world so much. In addition to the physical and economic toll, many have also felt the psychological toll of the pandemic, the loss of “normalcy” that comes with not being able to eat in a restaurant, visit loved ones, or enjoy public gatherings.

For many, perhaps the greatest loss of normalcy has come from the loss of sports. The sound of thousands chanting at a professional soccer game, a summer afternoon at a youth baseball or softball game, even the spectacle of the annual U.S. college basketball tournament have all been lost to one degree or another in this difficult 2020.

However, this will soon change. With European soccer leagues leading the way, professional sports are returning around the globe, and other sports leagues are following. High schools and universities in the northern hemisphere are preparing for fall seasons they hope will happen, and many youth leagues are already in action.

FOR YOU: Playing Hardball with Standards

With this return will come a second jolt of normalcy, one that very much involves the technical experts on the sports equipment, playing surfaces, and facilities committee (F08). This normalcy involves helping to ensure the safety of athletes by developing standards for what is possibly the single most important piece of equipment in sports: the synthetic and natural surfaces on which those athletes play.

According to the Synthetic Turf Council, there are currently 12,000–13,000 synthetic turf sports fields in the United States alone, with 1,200–1,500 new installations per year. These fields provide the advantage of being more durable and lower maintenance than natural playing surfaces. However, in many cases, they are also harder. And with fall soccer, football, and field hockey seasons gearing up at the professional, collegiate, high school, and youth levels, these fields are about to see a great deal of use in the United States as well as around the globe.

“Safety is always of primary importance to our industry and to this committee,” says Phil Stricklen, a member of the subcommittee on artificial turf surfaces and systems (F08.65), task group chair, and president of Turf Dr. Phil, where he specializes in synthetic turf. Stricklen identifies the two primary issues facing his committee when it comes to synthetic playing surfaces. “The impact injuries and the public health issues surrounding the materials that go into the turf are things that we’ve been working on quite a bit in this committee.”

The public health issues that Stricklen mentions are virtually unique to synthetic turf and primarily involve polycyclic aromatic hydrocarbon (PAH). In addition to tobacco smoke and wood-burning fires, PAHs are present in car tires, which are used to create the crumb rubber infill in synthetic turf fields around the world. This issue has become a concern in recent years, particularly in Europe.

The European Union, as well as the U.S. Environmental Protection Agency and the U.S. National Institute for Occupational Safety and Health, regulate PAHs in air, water, and soil, but not in synthetic turf. “In 2019, the European Union had a request from a Dutch group [National Institute for Public Health and the Environment] asking them to restrict the level of PAHs in the infill materials going into synthetic turf fields,” says Stricklen.

With many companies supplying infill materials to both Europe and the United States, the effort to determine the level to which PAHs should be restricted quickly became a transatlantic concern, with the goal of deciding on one consistent level — and test method — for both continents. The result from Stricklen’s task group is the proposed specification for polyaromatic hydrocarbons contained in synthetic turf infill materials (WK65799).

“This will actually be a standard specification, so it will include the maximum level [for PAHs],” says Stricklen. “Science has shown that there are a lot of polycyclic aromatic hydrocarbons, and some of them are known carcinogens and toxins. Eight priority PAHs have been identified that represent the carcinogenic compounds of the group, and what they’re proposing is setting a limit for those eight PAHs that are of concern.”

There would be many potential implications at that point, according to Stricklen. “It could be put in a [vendor’s] bid package that their infill has been tested to the standard and meets the standard. If there was a concern in the community, they could go out and take a sample from the field and make sure it’s compliant with the standard.”

The proposed specification is currently scheduled to be balloted by the committee in the fall, and should be published soon thereafter. 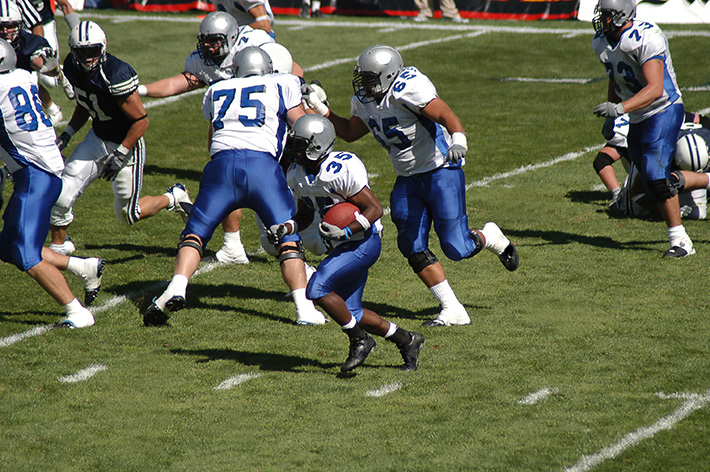 According to the U.S.-based National Football League (NFL), the number of concussions in pro football in 2019 remained below the previous three-year average of 266.3. However, the overall number did rise slightly over 2018, climbing from 214 to 224 year over year. And with a study last year in the journal Pediatrics reporting a rise in concussions in high school sports over the years 2013–2018, it is clear that there are areas in which more can be done to help increase safety and lower the risk of injury.

Not surprisingly, the ability of a playing surface to absorb the energy of an impact plays a role in impact injuries to the lower extremities and head. And when it comes to measuring the physical properties of a playing surface, the subcommittee on artificial turf surfaces and systems oversees what Stricklen calls the “gold standard”: the specification for impact attenuation of turf playing systems as measured in the field (F1936).

This specification is designed to determine a value called the “g-max,” which is a measure of impact attenuation — or hardness for the layperson. To accomplish this, an accelerometer mounted inside a missile is dropped from a fixed height onto the surface in question, and the resulting value allows producers and users of synthetic playing surfaces to determine the change in performance over a surface’s lifecycle, as well as assess the risk to players.

The test itself is typically conducted with a flat, 20-pound (9-kilogram) missile, but a proposed revision aims to create a test using an 11-pound (5-kilogram), hemispherical (round-shaped) missile, which some believe could be more accurate and repeatable. The test method for determination of system fall height of turf playing systems using the hemispherical procedure E missile (WK64649) reflects the increased use of hemispherical missiles in testing, and a new standard would make its use even more widespread.

Richard Breland, F08.65 subcommittee chair and owner of Breland Consultant and Service, as well as Athletic Surfaces Technology LLC, has been working with synthetic turf surfaces since 1968. To provide an idea of what relatively “hard” and “soft” g-max values would be, Breland says, “Concrete is around 1,000 g’s. Anything 200 g-max and above is considered something that would break bones.”

Under F1936, the maximum g-max value permitted for turf systems is currently 200, but as Breland says, “That’s probably not where you want to have it.” Having attended annual NFL meetings on playing surfaces for many years as an ASTM representative, Breland says that in reality, the g-max values of the synthetic fields being played on are much lower — and should be lower for both synthetic and natural turf fields. When properly installed and maintained, synthetic turf fields, like natural turf fields, can have g-max values below 100. However, Breland says, “The NFL uses a number of about 165 g’s, and the Synthetic Turf Council uses 165 g’s as the maximum level.”

The goal in all of this is to help create a safer environment for today’s athletes, professional and amateur alike. And at least one technical expert and ASTM International member specializes in an alternative way to achieve safety: properly maintained natural grass.

Discussing the different types of natural playing surfaces, DePew says there are two basic types: sand-based and soil-based. Sand-based fields are primarily used in higher-end facilities like golf courses and professional and collegiate sports stadiums, while soil-based systems are the more common type of field for parks and recreation and youth sports. He acknowledges the quality issues with both. “A good, loamy field that would have a good soil structure is the ideal athletic field. The problem is, you can’t use it as often, because using the field destroys the soil structure. This is especially true when the field is wet, as soil-based fields do not drain as well as sand-based fields. Conversely, sands are granular and do not technically have soil texture so they drain well and can be used under wet conditions.”

To address this, DePew’s subcommittee on natural playing surfaces (F08.64) recently proposed the guide for designation of turfgrass athletic field maintenance programs (WK56652). Intended to combine two separate guides for warm and cool season grasses into one replacement, the proposed guide is meant to assist in the management of natural athletic fields, as well as establish performance level and/or use expectations. It will be balloted sometime in the new year.

The intent is that this guide will help lead to better maintenance of, and greater longevity for, natural playing surfaces, which in turn could help with the issues of lower extremity injuries and concussions. That’s because, as DePew points out, the g-max values for properly maintained natural surfaces can be very low.

“So just as a comparison, for most natural turf fields, those [g-max] values are going to be under 100 and sometimes substantially less than that,” he says. “Manufacturers are getting much better with their synthetic systems, but they still haven’t mimicked natural turf yet.”

Barring a resurgence of the COVID-19 virus, football and soccer at all levels may soon be kicking off, field hockey balls will be dropped, and a degree of normalcy will soon return. That return will also include the ongoing effort to make playing surfaces safer and less toxic, both for the professional athletes who thrill millions around the globe and the amateur athletes who thrill their hometowns on Friday evenings. And the members of the sports equipment, playing surfaces, and facilities committee will continue working to support safer sports.■