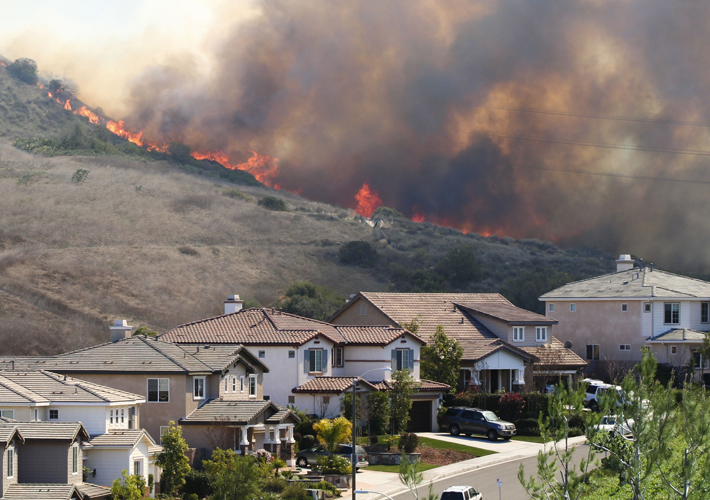 Standards and the Fight Against Wildfires

Tiny pinpoints dot a world map at NASA.gov to show where wildfires burn. Images and satellite data on the site chart fire locations and characteristics such as the burn area, providing information that will help officials further understand and combat the spread of future fires.

This is just one way information is gathered about this ongoing threat to lives and homes, a threat that is particularly serious where houses and wildland meet.

This transition between wildland and human development is called the “wildland-urban interface” or WUI (pronounced whoo-eee). As woods and meadows give way to people’s homes and communities, and people continue to seek areas where they can live “in the country” or among greenery, the line between the two zones continues to evolve.

MORE FOR YOU: Fire and Flammability Standards

And in the dry and windy fire seasons of recent years in California, the ever-changing WUI has experienced an increasing number of deadly fires with loss of life, as well as building and landscape destruction.

The yearly California building code review and revision cycle has begun, and “The fires will be discussed in light of what the code says,” says Steve Quarles, Ph.D., recently retired chief scientist from the Insurance Institute for Business & Home Safety. Quarles is part of the group considering possible changes to the state’s building code, which references standards that include tests from the ASTM International committee on fire standards (E05).

Quarles, a long-time E05 committee member, says the state code, like other building codes, references E05 standards as options for compliance. For example, the test method for evaluating the ability of vents to resist embers and flames (E2886) — the situation when a home is threatened by wildfire —­­ is cited in the California code.

Another example is the test method for resistance to wildfire penetration of eaves, soffits, and other projections (E2957), which helps evaluate how well these outside building components can resist fire penetration.

One of the most commonly used standards related to external fires (wildfires) is the test methods for fire tests of roof coverings (E108). Originally approved in 1955 and updated multiple times since then, the methods cover how to evaluate how shingles or other coverings will respond to outside fire, burning and flying brands (ie, superheated debris), and flame spread. Thomas O’Toole, ASTM staff manager for the committee, says, “This is the fire test for roofing materials.”

These and other standards from the E05 subcommittee on external fire exposures (E05.14), address building materials in relation to fires that come from outside the building. Other standards from the E05 committee, such as the often-used test method for surface-burning characteristics of building materials (E84, also known as the Steiner tunnel test), and the test methods for fire tests of building construction and materials (E119), typically consider materials affected by fire on the inside.

As research furthers the understanding of specific fires and how to reduce their tragic effects, ASTM International members will continue to improve existing standards and develop new ones to help protect people and help make buildings safer.