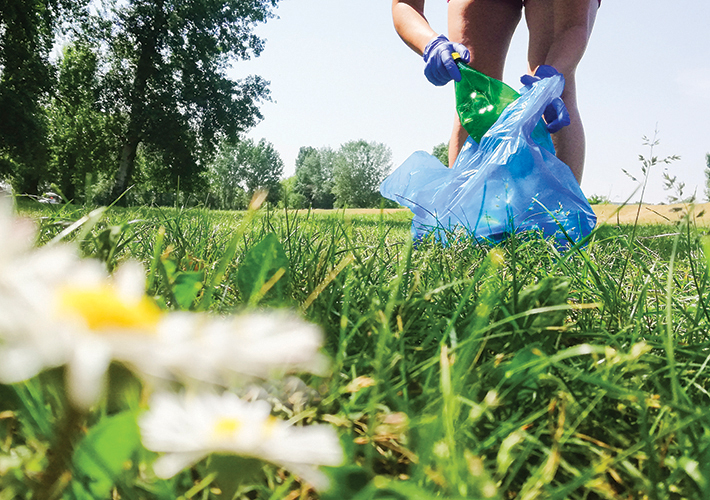 A Subcommittee Looks at Next Steps for Plastics Standards
BY:
KATHY HUNT

From toothbrush handles and computer keys to aviation components and medical devices, plastics have become an ubiquitous part of modern life. To keep up with demand, manufacturers produce between 270 and 360 million Mg (300 and 400 million tons) of plastic worldwide each year. Unfortunately, what happens once plastics outlive their usefulness has become a troubling issue of our age.

The amount of plastic waste discarded has galvanized some people against these polymers. According to a report from the Royal Statistical Society, as of 2017, only nine percent of plastic was recycled while 12 percent was incinerated. The remaining 79 percent went into landfills and the environment. According to a study published in Science magazine, roughly eight million metric tons of plastic end up in the world’s oceans each year. A key group working to alleviate these problems and support safe plastics disposal is ASTM International’s subcommittee on environmentally degradable plastics and biobased products (D20.96), part of the plastics committee (D20).

The D20.96 subcommittee organized in 1990 at a time when manufacturers boasted of making eco-friendly products without any verification of their claims. These were the early days of environmentally degradable plastics, with no standard practices, test methods, or specifications. Subcommittee D20.96 then began the hard work of developing these much-needed standards to establish degradability and biodegradability and assess the impact of degraded plastics.

Originally, the group focused on environmental concerns such as composting biodegradable polymers and paper alongside food, yard, and agricultural waste, and the need for compostable diapers. Marine life consumption of polyethylene carry-out bags and wrappings, as well as both sea and land animals becoming entangled in beverage rings, became major issues in the public eye, says Ronald Walling, president of the Advanced Materials Center Inc. and former D20.96 vice chair.

To control the environmental impact of plastic bags and beverage rings, the subcommittee developed the practice for fluorescent ultraviolet exposure of photodegradable plastics (D5208). “ASTM D5208 was developed with Union Carbide, Triangle Labs of North Carolina, ITW - Hi Cone of Illinois, and Advanced Materials Center Labs cooperating in a joint venture to develop a controlled, accelerated test to simulate actual outdoor conditions,” Walling comments. “Tensile evaluation was developed and round-robin tested to ensure proper documentation of this type of degradation.”

In developing D5208, one material, ethylene-carbon monoxide (E/CO) resin, was found to be especially effective at photodegradation, deteriorating relatively rapidly when exposed to light, heat, and water. The impact of this has been significant. In fact, today, all plastic beverage rings sold in the U.S. must be degradable, so the resin is commonly used in that packaging.

Biobased product standards relate to goods with organic carbon from renewable origins such as plants, animals, or marine materials instead of nonrenewable origins such as petroleum. Of these standards, four are considered “primary,” with D6866 (the test method to determine the biobased content of solid, liquid, and gaseous samples through radiocarbon analysis) being the most widely used, says Kelvin Okamoto, Ph.D., president of Green Bottom Line and chair of the subcommittee. Using it, manufacturers create more sustainable products or “greener” plastics and reduce their carbon footprints.

Three other standards are widely used for industrial composting:

Of the three, D6400 has the most global recognition and is the standard most used for composting.

Meanwhile, D5338 describes how to test and generate data for composting. The testing takes place under controlled composting conditions at temperatures at which extreme, heat-thriving bacteria and other microbes exist. Testing under D6691 occurs in controlled laboratory conditions with at least 10 known aerobic marine microorganisms or with the indigenous population of microorganisms in natural seawater.

Okamoto says that the three standards are globally used and respected. “Updates will be evolutionary rather than revolutionary,” he adds, noting that these standards are used in Japan, China, Korea, and Taiwan.

Worldwide, companies such as BASF, Procter & Gamble, and Walmart have referenced D6400 in their labeling guidelines. Several U.S. states and municipalities have also mandated that any plastic claiming to be compostable must meet this ASTM International standard. California and Maryland now require D6400 compliance, as do U.S. cities with composting programs such as San Francisco, Boulder, Seattle, and Austin. In Europe, France and Italy now require compostable and biodegradable bags in markets.

This is not the only D20.96 standard to be used globally. Outside the United States, Vinçotte, the Belgian accredited inspection and certification organization, has chosen D6866 as the test method for its “OK biobased” certification program. Vinçotte’s program allows manufacturers to independently assess the amount of renewable raw materials in their goods.

“The end of life of plastics is front and center on everyone’s minds, making these standards more visible and making people look more closely at them,” says Ramani Narayan, Ph.D., Michigan State University distinguished professor of chemical engineering and materials science, and founding chair of D20.96.

This rising interest in the end stage of plastics is also playing out at the New York-based Biodegradable Products Institute. BPI independently tests, verifies, and certifies compostable products and packaging. “BPI has seen a dramatic increase in the number of companies interested in compostable products. In just the past three years, we’ve seen the number of BPI-certified products jump from 5,000 to 9,000,” says Rhodes Yepsen, the organization’s executive director.

With the greater demand for compostable products and greater visibility of D20.96’s standards, technical experts often bring to light new questions, ideas, and scientific findings. Graham Swift, Ph.D., GS Polymer Consultants and vice chairman of D20.96, points out that standards are intended to be updated every few years.

For example, D20.96 is working on a major effort to update the water biodegradability test method. “It is our job to get the science right. Others can set regulations more quickly, but we need to make sure that the science is there to back up the regulations or change them,” Okamoto says.

Biodegradability in marine environments is a tricky topic. Many organizations such as the Ocean Conservancy and the World Wildlife Fund argue that oceans are not dumping grounds and plastic should never go into waters. Yet plastics often end up on water surfaces, ocean floors, or elsewhere in whole form or as particulates that can be ingested by marine life. By designing plastics for faster marine biodegradability, the risk to aquatic life can be reduced.

Evaluating how laboratory results play out in the real world likewise complicates the conversation about marine biodegradability, a fact that concerns Narayan. “All these tests are done in 30-degree Celsius lab conditions. Ocean temperatures are roughly 4 degrees Celsius. The higher lab temperatures result in much shorter periods of degradation. In the oceans, the longer time for degradation will have a greater impact,” he says.

Time is a general concern for degradable plastics and biobased products, according to Swift. “This is one of the big unknowns. Every standard is associated with short-term biodegradation where testing takes place for one to two years in the lab. What happens after two years? Does the product still degrade, but slowly?” he asks.

Another concern is the vastly different environments in which polymers may degrade. How quickly and efficiently will a degradable plastic break down in the arid desert versus the frozen tundra versus a humid swamp? “It’s an ongoing scientific question: How do you really estimate a laboratory effect to what happens in the real environment? We wrestle with it and do our very best,” Swift says.

For almost 30 years, this is what he and the 100-plus members of Subcommittee D20.96 from across the globe have worked toward and achieved. They have done — and continue to do — their best to create global standards for environmentally degradable plastics and biobased products. In doing so, they have made plastics safer and greener.