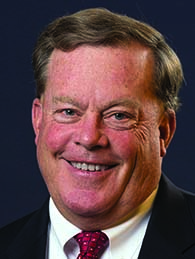 There is an old country song, “I Forgot More than You’ll Ever Know,” that has been remade numerous times. When talking about the standards business with John Pace, ASTM International’s senior vice president, it’s easy to hear that classic tune playing in your head.

At the 2019 Frankfurt Book Fair, he was asked to give a talk reflecting on his life in standards, and he recently recounted the highlights.

“The standards business is the greatest win-win proposition in the world,” Pace laughs. He is sitting in his office at ASTM headquarters one month before his retirement, yet his bags are packed and sitting in the corner, ready for yet another business trip.

“Let me tell you where I’m coming from,” he says, warming up. “We get the best and brightest minds in the world to join ASTM, and they come to the meetings and do a data dump of their intelligence and help us create world-class standards. These same bright minds pay $75 to join ASTM. However, for that $75 they can participate in any one of the development activities. They can influence the technology that’s going to make their products and services best in class. And they can stay abreast of trends in their industry. Where else can you get that kind of value in return for $75? That’s a pretty good deal.”

Pace has seen the standards world from every possible angle. Working in business development for standards reseller IHS (now IHS Markit) for over 20 years, he learned the business side of the field. With ASTM International, where he spent 18 years, he learned the ins and outs of the standards development process and saw all the good that standards can do in the world. This led him to what he said might have been the greatest epiphany of his career.

“I’d never been one for taglines,” he says, remembering how he felt several years ago when ASTM began the rebranding process that would result in the brand identity of “Helping the World Work Better.”

But over the course of his many years in the standards business, he realized his sense of it had changed. “I started thinking about the standards business, and what it does, and safety and reliability, and making things more affordable. And I realized yeah, we are helping the world work better. Looking at it now, in terms of my occupation and where I’ve been over the last 40 years, it’s right on target.”

As you might have guessed, over those 40 years in standards, Pace has seen a lot: from the time he tried (successfully) to get an internet connection on a rotary phone in Helsinki in the early 1990s, to his trip to
frigid Prudhoe Bay, Alaska, to see one of the northernmost oil-pumping operations on earth in action, to his achievement of hitting golf balls on every continent (except Antarctica).

The one constant Pace has experienced is change — and not surprisingly, he sees more of it on the horizon. He recently talked about some of the issues that had the biggest impact on the field of standards during his career, and he gave his take on where that field is headed.

“I used to say, ‘Standards is the most unstandardized business in the world.’ I’ve been doing this for over 40 years and up until the last 10 years, each SDO [standards development organization] did its own thing. But in the last few years it has gotten a heck of a lot better. There has been an openness and cooperation recently, and ASTM International has cooperation with many other SDOs. I might have lost that bet 10 years ago.”

Copyright Is a Hot Topic

“Ever since the world went electronic, copyright has been an even more challenging issue. You have to pay attention to it, especially to those people trying to make a profit from intellectual property without permission. Copyright isn’t just one thing, there’s a whole myriad of things that touch on it.”

“My favorite example of what happens when a closed standard is forced upon the commercial marketplace is the Betamax story. Betamax was the hottest thing until Sony refused to share and tried to dictate the industry standard. That led to the rise of the competitive VHS format and was a major contributing factor to Beta soon becoming extinct. I personally think that is the problem with some of the current AI technologies we’re seeing in the standards world.”

“A lot of SDOs don’t understand them, don’t understand their business model. To me, they’re a sales force of 300 that helps my organization. I have a different viewpoint from a lot of people,” he says, then smiles. “But I bet they’ll wake up a few years from now and say I was right.”

As for his most important piece of advice to anyone just entering the standards business, that’s easy. Whether you are on the sales side or the development side, his advice is the same.

“To really understand the standards business, you’ve got to get in the weeds, you’ve got to engage everything,” Pace says. Talk with your business partners. Talk to your customers. Stay on top of the trends coming down the pike. That’s what got me to where I am today.”

From a personal standpoint, Pace likes to say that he is the luckiest person on earth. “I kind of feel like Lou Gehrig when he was saying goodbye at Yankee Stadium. I feel like I’m one of the luckiest people in the world to have had this job. The friendships I’ve made — it has been a fun, fun ride in the standards business.” ■