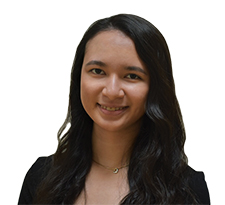 And for the now-16-year-old junior at Presentation High School in San Jose, California, saying she is interested may be an understatement. Gorin’s father is a systems integration engineer who once brought home a 3D printer that he borrowed. That’s where it all started.

“At home now, we have a Lulzbot Taz 5 and I loved how 3D printing became an effective tool for replacing parts of anything,” says Gorin.

She recalls a moment in seventh grade when her father’s coat hook broke, and she saw the opportunity to create one. “I saw that as the perfect excuse for me to use the 3D printer to create a replacement hook,” she says.

Gorin wanted to print the hook using a material that would not break. She had access to a variety of polymers used in 3D printing, including PLA (polylactic acid), ABS (acrylonitrile butadiene styrene), HIPS (high impact polystyrene), and PETG (polyethylene terephthalate), so she decided to test the strength of the different plastics.

After doing some research online, Gorin discovered ASTM International standards and developed an experiment using the test method for tensile properties of plastics (D638). She didn’t have access to an industry-grade universal testing machine (UTM) — a device used to evaluate the tensile and compressive strengths of materials — so she improvised. “I hooked a kitchen scale to the top of a wooden frame I built and attached it to my test specimen, which was clamped by two pieces of metal and fastened using wing nuts,” she explains. “On the other side, I created a drive shaft that moved up and down with a drill until the pieces broke.”

In seventh grade, Gorin was nominated by Synopsys Science Fair to compete in the California Science and Engineering Fair (CSEF), then known as the California State Science Fair, for her project on testing the tensile strengths of 3D printed plastics. In eighth grade, she again used 3D printing for a project focusing on radio frequency shielding for cellphones.

Gorin continued to use ASTM International standards during her first two years in high school, most notably to help her design and build her own miniature UTM with a dual-drive system (an operating system that combines both a solid-state drive and a traditional spinning hard drive). The standards she compiled helped Gorin figure out how she wanted to design her machine — she was aiming to be able to run tests for other standards beyond plastic tensile strength. She focused mainly on four standards in the mechanical properties subcommittee (D20.10), which is part of the plastics committee (D20). These tests include:

“When I started developing my mini-UTM, I could not find anything on the internet or YouTube,” she says. “Since showcasing at CSEF, I’ve started to see more DIY websites pop up about how to make your own testing machine.”

During her sophomore year, while doing more 3D printing experiments, Gorin noticed warping and layer separation occurring during one of her builds. When she couldn’t locate an ASTM standard to test it, she reached out to the committee, which agreed that there was a gap. Now, Gorin is developing her own test method, which she hopes will someday become an ASTM International standard.

Working in the materials science laboratory at Santa Clara University, Gorin used an Instron UTM to run her tests. She presented her project at this year’s Synopsys Science Fair competition, held online March 11-12, and took home first prize, qualifying her for the CSEF once again.

Moving forward, she has big plans for the future. “The future possibilities are endless. What I can tell you for sure is that I love working with additive manufacturing and testing different materials — especially to their breaking point. I have so much fun working on these types of projects. Maybe I’ll have the chance to spend my career in this field.” ■