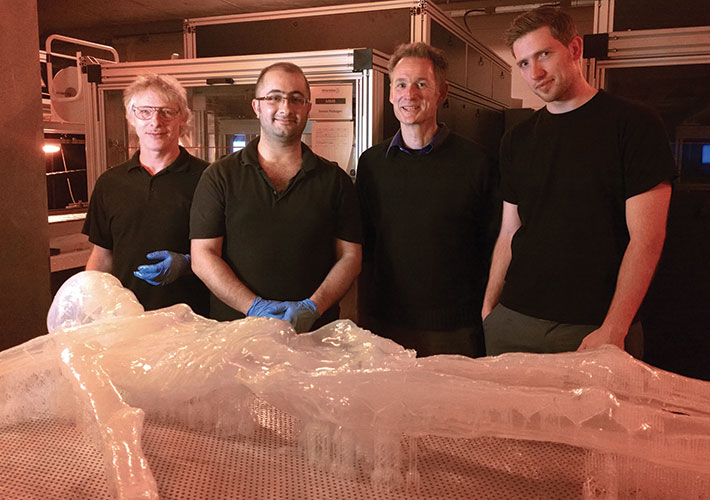 Artist Gary Staab (second from right) with members of the Materialise team.

The story begins more than 5,000 years ago. A man wandering in the mountains of Europe was shot with an arrow and left to die. Uncovered on a 10,000 foot (3,048 m) glacier near the border between Switzerland and Italy in September 1991, the man, one of the oldest human bodies ever found, was named Ötzi the Iceman by his discoverers.

Ötzi's personal effects (a quiver of arrows, primitive shoes, a roughly made knife) indicated that his discoverers were not dealing with just any body. From the beginning, care was taken to ensure that Ötzi would be preserved just as he had been found. To avoid microbial contamination, Ötzi is kept frozen and generally inaccessible.

In order to further the study of Ötzi without damaging the man himself, artist Gary Staab was assigned create an accurate sculpture of the iceman. Staab's creation would be based on computed tomography scans that determined the cause of Ötzi's death and served as a blueprint for a 3D printed copy of his body. That copy was created at Materialise, a 3D printing software and services company headquartered in Belgium.

"I for one have seen many objects printed at Materialise, but only Ötzi gave me goose bumps as he emerged from the resin, with people from throughout the company popping in to take a look as well," says Vanessa Palsenbarg, corporate communications manager, Materialise. "We hope to bring even more stories like this in the future, those that capture people's imagination and get them more excited about this truly amazing technology."

Standards used for a wide variety of 3D printing projects are developed by ASTM Committee F42 on Additive Manufacturing Technologies, formed in 2009. F42 standards contributed to the recreation of Ötzi, and to the design of lighter cars, safer planes and better orthopedic implants.

ASTM member Jan Van Espen, a consultant for titanium implants at Materialise, notes the importance of ASTM standards to the advancement of 3D technology.

"While validating multiple complex medical 3D printing processes (for example, titanium implants and surgical guides), ASTM standards have been shown to be an indispensable toolkit," says Van Espen. "ASTM standards are used as the solid basis for an objective test platform framework – also with the certification authorities – and they provide insight in the parameters which are critical for good test executions. Materialise is eager to further collaborate on ASTM standards related to 3D printing."

Palsenbarg also notes that, even while working on projects as complex as Ötzi, Materialise has also been active in educating small and medium sized companies on how they can best take advantage of new possibilities offered by additive manufacturing.

"Additive manufacturing really allows startups and SMEs to get new products on the market without the heavy investments and risks related to mass production," says Palsenbarg. "For the same reason, AM drives product innovation within these organizations: it allows for an iterative approach on product development where design upgrades can be implemented on a continuous basis."

In short, Ötzi the Iceman is simply one way that additive manufacturing can take us back to the future.