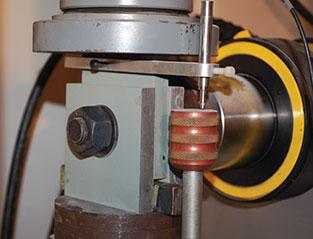 An ASTM subcommittee is developing a proposed standard to test the slip coefficient properties of coatings used in slip-critical bolted connections. The test is based on an appendix in the "Specification for Structural Joints Using High-Strength Bolts," published by the Research Council on Structural Connections. The proposed ASTM standard will expand on the Research Council standard by describing the preparation of test specimens in detail and by conducting an interlaboratory study that will allow for the inclusion of of precision and bias statement.

"The coatings used on the bolted connections on bridge structures help to retard the corrosion of the underlying steel while helping to ensure the safety of the traveling public," says Bill Corbett, vice president and group manager–professional services, KTA-Tator, Inc. "Further, proper design of the connections on bridges and building helps to ensure structural integrity. If protective coatings are used in the connection, they are considered a component in the design."

Corbett says that the primary users of WK45390, once it is approved, will be coating manufacturers, testing laboratories and bridge/building designers. Manufacturers will have their coatings tested according to the standard while laboratories will use it to properly prepare coated test plates and generate reliable test data.

According to Corbett, bridge and building designers will have the confidence that the coating selected for use on the faying surfaces (the interface of the connection/gusset plate and the structural member) will provide the design slip resistance for the bolted connections on the structure, which will ultimately determine the number of bolts required for the connection.

The task group developing WK45390 will be working with the Research Council on Structural Connections, as well as bridge/building designers to ensure that the proposed standard will meet its intended need. All interested parties, particularly representatives of coating manufacturers, laboratories and academia are encouraged to join in the standard development process.