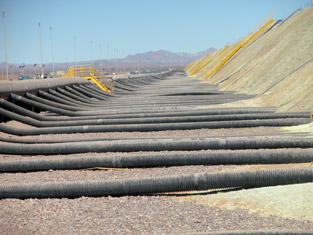 Heap leaching, a process of removing metal from ore, is more efficiently accomplished when air is introduced to the ore pile. A new ASTM International standard describes how corrugated polyethylene pipes and fittings can be more effectively used to facilitate the aeration process.

F2987, Specification for Corrugated Polyethylene Pipe and Fittings for Mine Heap Aeration Applications, was developed by Subcommittee F17.26 on Olefin Based Pipe, part of ASTM International Committee F17 on Plastic Piping Systems.

Heap leaching is used to extract copper, gold, lead, nickel, sliver, uranium or zinc. During the process, metal is removed from ore by trickling a solvent (such as sulfuric acid or sodium cyanide) at the base of the ore pile using a pipe system.

Corrugated PE pipe and fittings covered by F2987 are intended for deep underground applications such as heap leach pile aeration pipe under a mine heap or dump leaching process. Pipe in this setting is subject to harsh chemical exposure from corrosive effluents.

According to James Goddard, an F17 member, corrugated polyethylene pipe has been used in heap leach applications for more than 30 years.

"In the last 10 years, there have been efforts to increase the effectiveness of the leachate in extracting the desired metal from the ore by adding air into the heap leach pile," says Goddard. "This requires some special perforation designs and tight joints. It is undesirable for the leachate to enter these pipes. It is also necessary to protect the perforations from clogging or plugging."

According to Goddard, F2987 sets a quality level that provides some assurance that the pipe manufactured to it will perform as required in the design. Pipe quality, perforation design and placement, and resin quality are all important in the mine heap aeration application.

F2987 will be used worldwide by mining companies using heap leaching aeration. In addition, government regulatory bodies, such as the U.S. Office of Surface Mining Reclamation and Enforcement, might determine that it is appropriate to require the use of F2987 when heap leach aerations are being used. Testing laboratories may also test pipe prior to use to ensure the pipe meets requirements.

Now that F2987 has been approved, Goddard says that F17 will introduce the standard to mining companies, engineering firms and government agencies, explaining its intent and use. All interested individuals are encouraged to become involved in the ongoing maintenance of the standard.