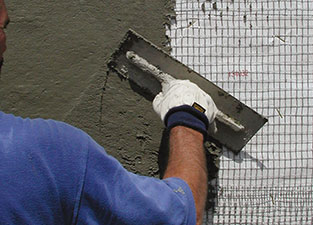 Both metallic and nonmetallic plaster bases, also known as lath, are used as reinforcement and to serve as an attachment mechanism for portland cement based plaster or stucco. While standards exist for such metal products, there had not been standards for their nonmetallic counterparts, which are generally made from materials such as fiberglass or plastic.

However, an increase in use of nonmetallic products, due to characteristics such as ease of use and non-rusting properties, has led to a need to develop standards. Two new nonmetallic plaster base standards have recently been approved by ASTM International Committee C11 on Gypsum and Related Building Materials and Systems.

"It's important to note that the new specifications are performance-based, meaning the product/system has to meet certain minimums that encourage innovation and product differentiation," says Egan.

C1787 and C1788 will be used by specifiers, test laboratories, contractors, manufacturers and regulatory groups.

In addition to C1787 and C1788, C11 also developed one other nonmetallic plaster base standard, C1764, Test Methods for Nonmetallic Plaster Bases (Lath) Used with Portland Cement Based Plaster in Vertical Wall Applications, in 2012. The test methods in C1764 evaluate the performance of vertical wall applications of lath under a variety of test exposures, incuding performance under transverse load and vertical load.

All interested parties, particularly contractors, design professionals, consultants, code officials and manufacturers, are encouraged to join in the standards developing activities of C11.